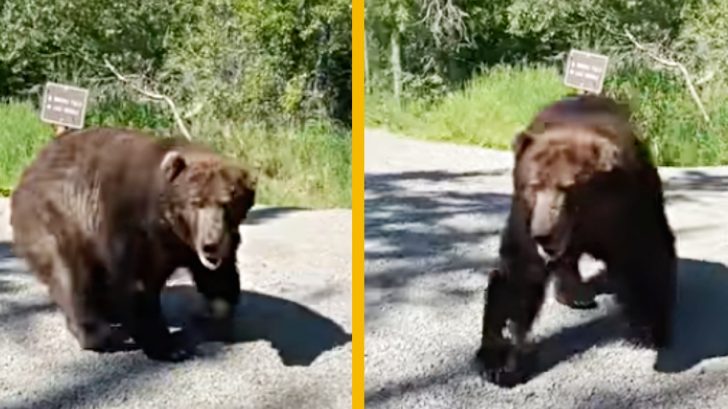 A group of travelers got up close and personal with one of Alaska’s most dangerous animals.

A giant grizzly bear casually strolled past a group of hikers in a now-viral video. In the clip, posted by TikTok user @mrsb111, the group of people spoke directly to the bear in a monotone voice. The animal’s only response was to glance at the travelers briefly. In fact, the grizzly seemed more interested in a picture of a bear painted onto one of the trail signs.

So far, the video of the bear encounter has surpassed 10.6 million views. Of course, many viewers debated on whether the travelers acted safely, but according to guidelines set by National Park Service (NPS), the hikers handled the situation by the book.

“Incredible trip to Alaska,” @mrsb111, wrote in her TikTok caption. “We [happened] to encounter a bear walking right in front of us fortunately my seaplane captain kept everyone calm.”

Watch the full encounter in the video below.

The travelers were very fortunate that the bear did not become aggressive, and the animal gave the group an Alaskan experience that they will not soon forget.

For more on how hikers should act during a bear encounter, check out the following video.