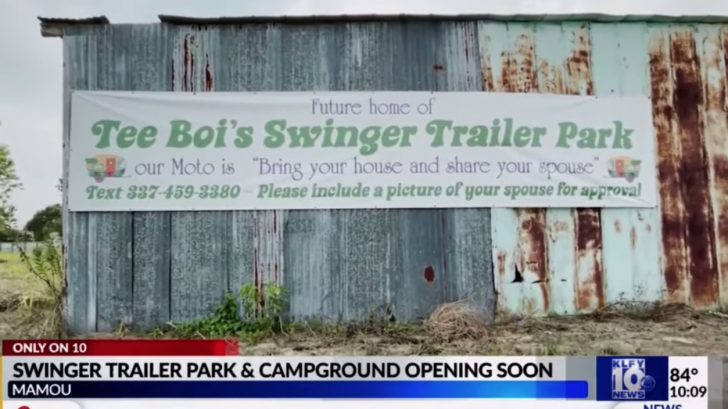 David Aucoin from Mamou, a south-central town in Louisiana, says he’s is building a swingers trailer park where couples can pull up with their RVs and get a little spicy with other couples.

The slogan written on a massive sign on the property says, “Bring your house, share your spouse,” and also jokingly reads, “please include a picture of your spouse for approval.”

David says the name of this wild wonderland will be called Tee Boi’s Swinger Trailer Park and it’s for fun-loving couples looking to spice things up a bit. The park will be setup and fully operational by Memorial Day 2022.

He says since the announcement of its opening, he has gotten loads of calls from couples inquiring about this new mobile home community. He added by saying that most people don’t realize it, but the swinger community is bigger than people are aware of.

When a news reporter drove out to the location where the swinger’s camp will be setup, she ask him some questions about the wild idea like…what does he have to say to the people who hate his idea?

“Sucks to be them,” he told news station KLFY. “There’s no reason to get mad at anybody for their preference. They’re not out here hurting nobody. Nobody is selling drugs here. People just want to have a good time, enjoy themselves the way they want to.”

According to David, if anyone disapproves of what he’s doing, they are the ones that are missing out. Tee Boi’s Swinger Trailer Park will be fully equipped with a nude pool, a nude yoga stadium, a strip poker hall, and a key-party cabana.

Hear more about the park from David himself in the video below!