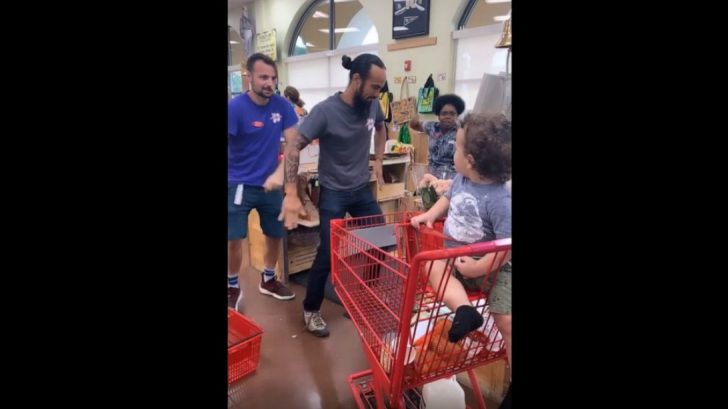 A trio of Trader Joe’s employees came to the rescue of a mom and her fussy toddler when they broke into an impromptu song and dance number in the check-out line.

Alexandra Seba filmed the beautiful moment when her 1-year-old, Julian Sol, was calmed down by the employees. She explained to Good Morning America that Julian became upset after trying to get a kids’ cart from his 3-year-old sister, Jade.

“Jade had finished pulling all the groceries off her big girl cart,” Seba said. “He wanted to take her cart and take off with it, but I wasn’t letting him. He threw a tantrum and one of the workers just starting singing.”

The employee named Tori began singing a catchy tune, “We love you Ju,” while her fellow workers began to dance. The baby immediately calmed down and watched the show, completely entertained.

Comments on Seba’s original post reveal that the employees at the Winter Park, Florida, Trader Joe’s are known for their baby calming skills. One commenter wrote, “That’s my crew!!! My boys LOOOOOVE Tori!!!! They are amazing. They’ve also helped out with tantrums.” Another shared, “Tori is the absolute best!! I’m always so thankful to see her and for her help when I’m there!”

If you weren’t a fan of Trader Joe’s before, this heartwarming story might just change your mind. Have you ever experienced something like this? If so, let us know in the comments below.