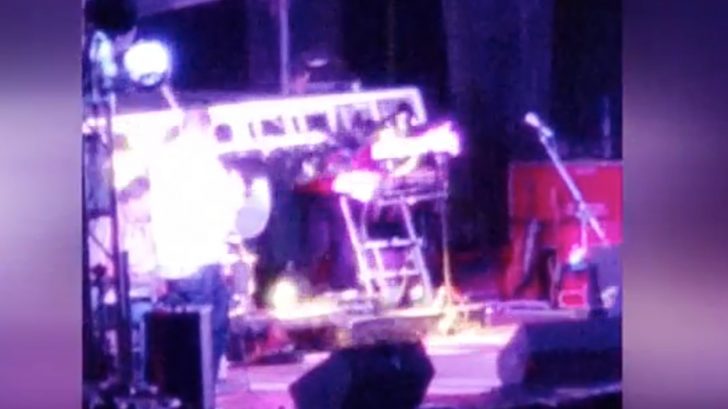 It was a terrifying night for this country hitmaker and his band at the Brazoria County Fair when a massive part of the stage assembly came crashing down into the band – sending one of the players to the hospital.

In a report by ABC 13 KTRK, country music singer Tracy Byrd has just finished his set at the annual Brazoria County Fair in Texas when the unthinkable happened and part of the stage assembly collapsed on top of the band.

Just one part of a great lineup of singers like The Randy Rogers Band, Big & Rich, and Aaron Lewis, fans from all over the area had clamored in to see one of the year’s best concert series for the region.

Singing his hits like “Ten Rounds of Jose Cuervo,” “Watermelon Crawl,” and “Keeper of the Stars,” Byrd had the crowd cheering by the time his set was over, but that would quickly turn into screams and panic as they watched a terrifying scene unfold on stage.

Cell phone video capturing the whole moment was sent in to ABC 13 KTRK and shows the entire incident that had folks scrambling to help the band.

Right as Byrd and his band were wrapping up the show, he’s taking off his guitar and preparing to walk off the stage when a giant lighting structure above the stage comes crashing down – directly on top of the keyboardist.

Other band members and Byrd scrambled to get out of the way before it struck them, too, but the keyboardist had his back to the lighting rig and was directly in its path.

Everyone on stage rushed to help lift the equipment off of him and once they’d gotten him free he was rushed to the hospital for his injuries – but has since been released.

The keyboardist, Vernon Emshoff, took to Facebook to thank everyone for their prayers and asked to keep them coming, adding “was a rough night.”

Thanks to everyone for the kind words and prayers. Keep them coming please. Was a rough night.

Our thoughts and prayers are with him for a full recovery. Details regarding his injuries have not been released.

Watch the full report from ABC 13 KTRK below.