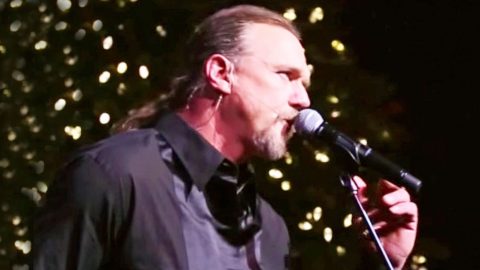 Christmas songs have always held a special place in the hearts of people young and old. From more traditional, faith-based tunes to upbeat, modern pieces such as “All I Want for Christmas is You,” there is a Christmas tune out there for everybody.

Country fans get lucky come Christmas time, because some of the best Christmas songs come from country stars. While country artists do sing original tunes for the jolly time of year, their renditions of the classics are often their most memorable contributions to the season.

Back in 2013, Trace Adkins put a different spin on some of the world’s most beloved Christmas songs through his album, The King’s Gift.

Completely comprised of classic Christmas carols, Adkins performed each of the album’s ten tracks in a Celtic style.

To go along with the album’s release, Adkins performed its songs and other Christmas classics during a televised show. One of the songs he performed was “The Little Drummer Boy,” which has been a traditional part of the Christmas season since it was recorded by the Trapp Family Singers in 1951.

Speaking to the crowd before he started singing, Adkins told them all the story of “The Little Drummer Boy,” and how he played his drum for the newborn baby Jesus:

“He gave the finest gift he had, which was his talent, or himself,” Adkins said passionately.

That passion carried over into his performance of “The Little Drummer Boy.” As Adkins’ deep voice boomed throughout the room, the sound of the drums and the violins provided a powerful accompaniment. The distinctly Celtic instrumentation and Adkins’ country twang resulted in the creation of one of the most unique versions of “The Little Drummer Boy” that we’ve ever heard.

Now it’s time for you to ring in the Christmas season by watching Adkins’ performance below!