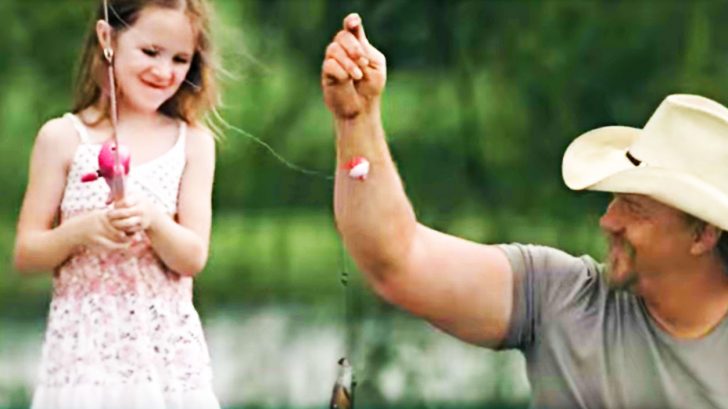 A precious moment he will never forget was captured on tape for this truly magical country song – one that has found its way into the hearts of millions of fans.

Trace Adkins is known for his deep, baritone voice, dedication to music, and his songs that really make an impact. For him, “Just Fishin'” was one that really hit home.

Trace recorded "Just Fishin" for his daughter, Trinity. He got to sing it to her last night at the Danville Harvest Jubilee! @PlayDanvilleVA pic.twitter.com/HYCH5GNRzx

Released in early 2011, the song was released as his second single for the album Proud to Be Here and immediately became a successful chart-topper, soaring across radio waves and even earning a Grammy nomination!

For the music video, he chose to bring his adorable daughter, Trinity, along to act out the beautiful father-daughter relationship the song’s lyrics speak of.

Shot on his own farm, this video captured a beautiful moment between Trace and Trinity as they worked together to tell the story in a visual way and shared some time fishing together.

“She ain’t even thinkin’ ’bout
What’s really goin’ on right now
But I guarantee this memory’s a big’in
And she thinks we’re just fishin’.”

Precious Memories Between Father & Daughter Are Made In Trace Adkins’ ‘Just Fishin”
You'll soon understand why this music video has touched the hearts of so many country fans. https://t.co/5IqlCyVdeU #countrymusic #TraceAdkins pic.twitter.com/sCGkQz3Oeo

You can tell from how the two interact, this was much more than just business as usual and that they really were having a blast making this memorable video.

Watch the full music video for “Just Fishin'” below and tell us your own stories of making memories with your kids!