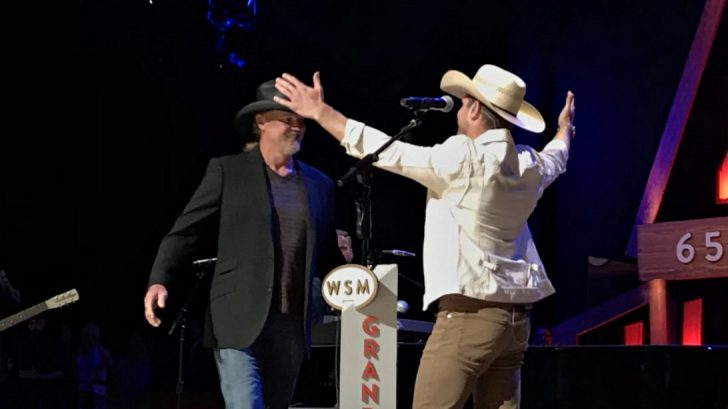 Performing on the Grand Ole Opry is a special occasion for any country star. But, for two of Music City’s biggest stars, the night was more special than usual.

For Trace Adkins the night was about celebrating his 15th year of being an Opry member. The “You’re Gonna Miss This” singer didn’t mind sharing his special evening with a fellow country star. In fact, he made it a night to remember for Dustin Lynch with an official invite to join the Grand Ole Opry. Lynch was almost immediately brought to tears by the honor.

“You’re going to be back here playing again on September 18th, I heard,” Adkins told Lynch. “I’m here to tell you that when you play here on September 18th it will be as the newest member of the Grand Ole Opry.”

“All the folks at the Grand Ole Opry are very selective,” Adkins told the excited audience. “We think that Dustin Lynch is going to carry on in that grand tradition.”

Lynch was visibly overwhelmed and surprised by the invitation as he removed his cowboy hat and paced the stage before hugging each of his band members.

“I can’t even talk or I’ll start crying,” Lynch said. “I want to say we would not be here without you guys and girls.”

After thanking his parents and his team, Lynch recalled his first-ever Opry performance on March 2nd, 2012, when he performed “Cowboys and Angels.

Watch Dustin Lynch’s official Grand Ole Opry invitation from Trace Adkins below. Then scroll down to watch his official video for “Cowboys and Angels.”

Lynch’s official induction will take place September 18th and he is the third male artist in a row to be inducted into the Opry. Chris Janson became a member earlier this year, and Chris Young was inducted in late 2017.