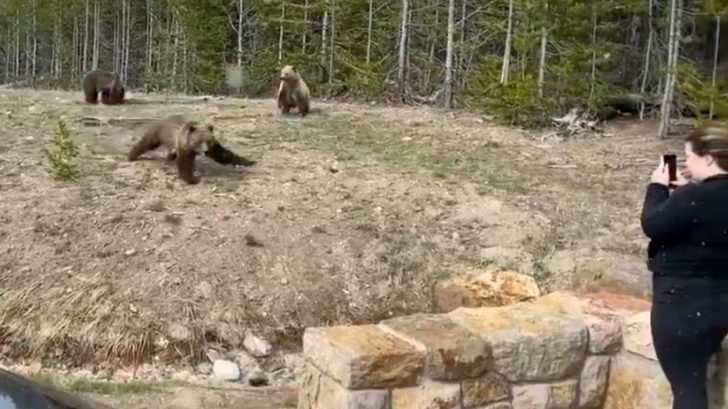 Darcie Addington was inside her vehicle at Yellowstone National Park when she filmed a bear bluff-charging a tourist standing a little too close.

NBC Montana shared the footage on Twitter saying, “Grizzly bear bluff charging a tourist that got too close.”

Darcie said she didn’t know the woman, however, several people warned her not to stand so close. She didn’t listen and cared more about filming the bear until one of them decided to charge at her.

Fortunately for this lucky tourist, the bear stopped just a few feet away and turned around to walk back towards the other bears. Realizing she could have easily been attacked, she stopped filming, put her phone in her pocket, turned around, and quickly walked away.

Yellowstone National Park has many dangerous animals like grizzly bears, wolves, free-ranging herds of bison and elk. Tourists are responsible for their own safety. The park asks that all visitors remain a minimum of 100 yards away from wildlife.

“If a bear approaches or touches your car, honk your horn and drive away to discourage this behavior.” Yellowstone said on their website. “Never feed bears. Bears that become dependent on human food may become aggressive toward people and have to be killed.”

Yellowstone said most encounters do not involve conflict, however, at least one person per year gets attacked by a bear in the park. This tourist was one of the lucky ones. Go ahead and check out the footage of the tourist standing too close to the bear below.

Check out this clip of a @YellowstoneNPS grizzly bear bluff charging a tourist that got too close. Darcie Addington took this from the safety of her vehicle. She doesn't know the other woman, but says several people warned her. Remember to give bears at least 100 yards of space. pic.twitter.com/7rnMgKGNxm