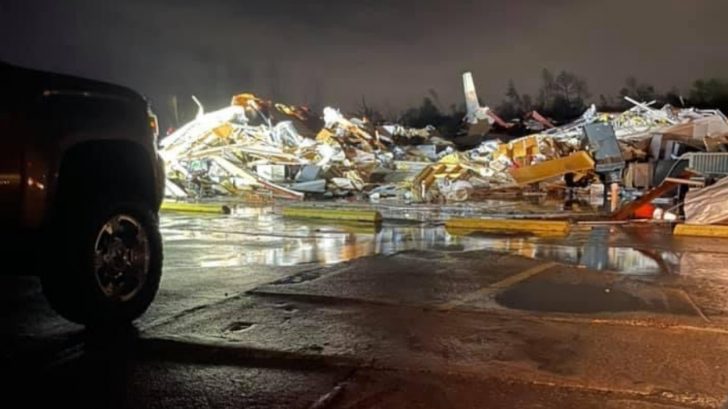 A destructive tornado tore through the northern part of Birmingham, Alabama on Monday night collapsing buildings, trapping people inside their homes leaving one person dead.

Working with first responders and snapping images when possible. In the worst damage. Storms in the area so we had to stop a minute. #ALwx pic.twitter.com/maeJfHlLWk

Fultondale Police Chief D.P. Smith explained that a young man went down to the basement to seek shelter from the tornado, but unfortunately a tree fell through the home which caused it to collapse, killing the young man.

Fultondale Mayor Larry Holcomb said in a statement on FOX, “There are still people trapped in their homes that we are trying to access at this time.”

Pictures & videos are streaming in from our field correspondent @AlaStormTracker on scene of a destructive tornado north of Birmingham, AL in Fultondale tonight. Injuries reported along with major structural damage. #alwx pic.twitter.com/eTV1byuo7N

Fultondale Police Chief D.P. Smith said five people have been hospitalized and Mayor Holcomb added that they had about 20 reports of minor injuries so far. Police and search-and-rescue crews are still out there assessing the damage and injuries in the area.

James Coker, the director of the Jefferson County Emergency Management Agency, said “Our current goal is always life safety. That is not only for the people who may have been injured but also the first responders who assist them.”

No classes will be held for either traditional or remote students at these schools. All other JEFCOED schools will be open Tuesday.

The National Weather Service will inspect the damage to determine the strength of the tornado.

Pictures and videos on social media have shown the aftermath of badly damaged buildings, including a Hampton Inn, Comfort Inn and Suites, and Chili’s restaurant. Take a look at the aftermath footage of the Hampton Inn below.