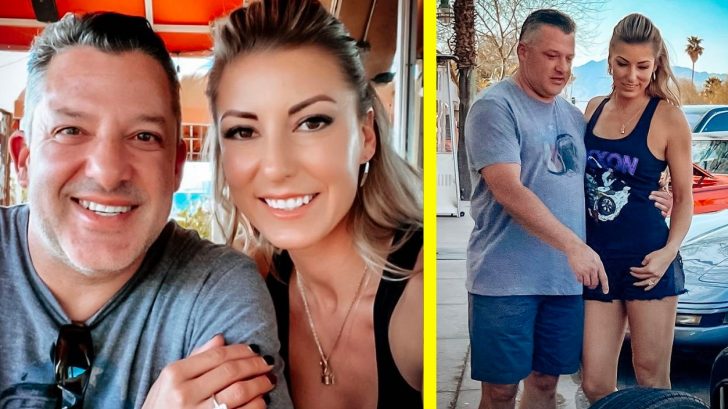 The three-time NASCAR Cup Series champion and team owner took to social media to announce his engagement to a fellow motorsports competitor after dating for a year.

Tony Stewart, aka “Smoke,” is about to celebrate his 50th birthday this year – and he couldn’t be busier with projects…or happier – with a newfound love in drag racer Leah Pruett.

The famous NASCAR superstar and sometimes heated personality on the track has not only experienced the ups and downs of racing – but in the last few years has endured the same in his relationships.

In May 2019, he revealed that he had officially ended things with fiancee Pennelope Jimenez. The pair had been together for more than 3 years and had gotten engaged in 2017.

With that in the rearview mirror, Stewart has found love once again, and this time with a fellow racer!

In a recent report by NBC Sports, Stewart explains that he and Pruett first met in 2019 on a FaceTime call set up by drag racing icon Don Prudhomme…from there, it took months for them to actually meet in March 2020 at a motorsports event.

“With nowhere to be for the first time in his life as a racer, Stewart accepted Pruett’s invitation to spend four days with friends at Lake Havasu in Arizona. He stayed for four months, dragged her to short tracks across Oklahoma and Texas when his racing schedule resumed, then became a constant spectator at her events when NHRA began,” the article says.

Now, the pair have gone public with their official engagement and Stewart explained why it was so easy to fall in love with a gal like Pruett.

“So excited to spend the rest of my life with a truly amazing woman,” he said on Instagram. “She’s motivated, hard-working, funny as hell, and as dedicated to her sport as anyone I’ve ever known. Love you babe.”

Alongside his kind words, he shared a series of photos of the two spending time and enjoying the world together – plus, one where she’s showing off the massive rock he got her!

Check out the full post below and join us in congratulating the happy couple!