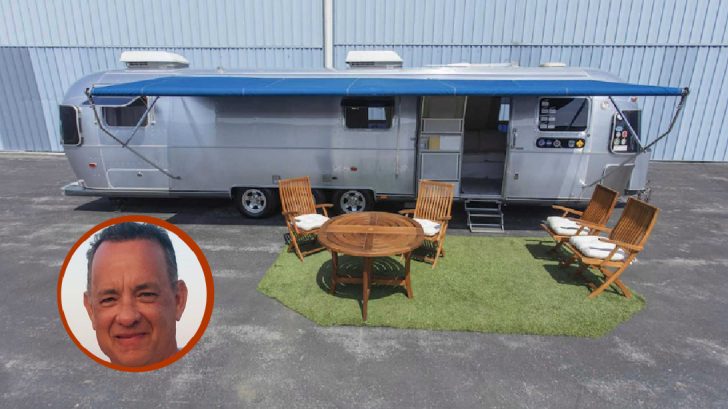 Academy Award-winning actor Tom Hanks’ custom 1992 Airstream full of memorabilia from some of his biggest movies, including Sleepless in Seattle and Apollo 13, is going up for auction in August.

Hanks’ 1992 Model 34 Limited Excella served as the actor’s private retreat on the set of his United States-based movies and houses decades worth of exclusive mementos from many of the movies. The trailer will go to auction on August 13 in Carmel, California, with Bonhams at the Quail Lodge Auction. The pristine Airstream features stickers marking various movie locations dating back to 1993’s Sleepless in Seattle to 2017’s The Circle.

The auction site notes that Hanks bought the trailer in 1993 and ordered a custom interior with only a bathroom and kitchen built in. He provided his own furniture, including a sofa , bed and dining area with table and chairs. All of the furniture is included in the sale of the Airstream.

The Castaway actor told Bonham Magazine about why he chose to purchase an Airstream nearly 30 years ago.

“I got it in the days when movies moved slower. I had spent too much time in regular trailers with ugly décor and horribly uncomfortable furniture, so I decided to buy a brand-new Airstream shell with an interior made to my own request,” Hanks said. “I didn’t want anything built-in, other than the kitchen and bathroom, so it had only a desk and cupboard in the back, a futon platform on the floor, and room for a small table and chairs. I wanted a regular sofa, too, so I had one made with removable legs so it would get through the door.”

In addition to the furniture, the sale includes cabinets full of accessories and personal items from Hanks. Those items include dishes, kitchen equipment such as espresso makers, an Apollo 13 mug signed by the actor and his film co-stars Gary Sinise, Bill Paxton, and Kevin Bacon. Two surfaces in the trailer also feature Hanks’ autograph.

The Airstream travelled from Seattle for Sleepless in Seattle to Beaufort, South Carolina, for Forrest Gump, to Philadelphia (Philadelphia), New York City (Sully) and Los Angeles, according to Bonhams. The trailer was a popular gathering place for Hanks and his friends and castmates over the years as they met to unwind after long days of filming.

The auction is listed without a reserve, meaning that this unique item will indeed have a new owner by auctions end. Hanks’ Airstream is estimated to sell for between $150,000 and $250,000.