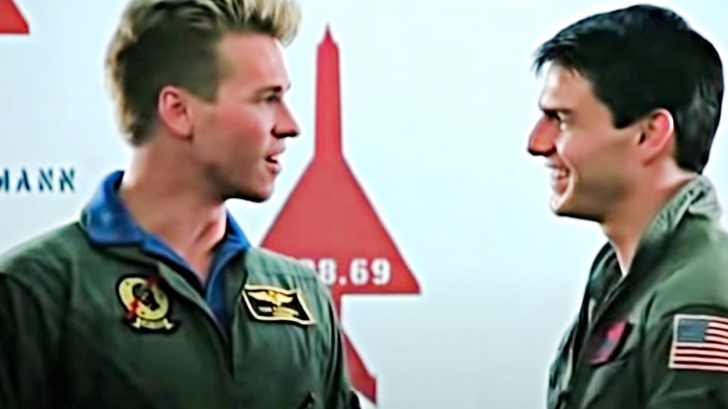 In an excerpt from Val Kilmer’s new memoir titled I’m Your Huckleberry and featured by The Daily Beast, Kilmer shared an inside look on what it was like behind the scenes of Top Gun and working with his co-star Tom Cruise.

Top Gun debuted in theaters in 1986, quickly became a hit, and went on to be one of the most iconic movies of the eighties. The movie won several awards, including an Academy Award, a Grammy, and a People’s Choice Award, just to name a few.

Top Gun starred Tom Cruise as Maverick and Val Kilmer as Iceman. Both characters are students of the United States Navy’s elite fighter weapons school and tensions ran high for the two of them while they competed to be the best in class.

Kilmer revealed in his memoir that the two stars didn’t converse much or hangout off-set, saying the actors separated into two groups after filming. One group was Kilmer’s, and the other was Cruise’s, very similar to how their character’s rivalry played out in the movie. Kilmer admitted that his crew was considered to be “the party boys.”

Kilmer shared his thoughts on the separation. “Tom refrained from our revelry, with good reason. From day one, he was laser-focused on a singular goal: to become the greatest action hero in the history of film. He was up nights learning lines; he spent every waking hour perfecting his stunts. His dedication was admirable.”

Kilmer admitted what he found most admirable about Cruise was the fact that he was able to achieve his goal of becoming “the greatest action hero” within his role for Top Gun.

Kilmer reflected on a time he pranked Cruise on set by sending him on a scavenger hunt for an expensive bottle of champagne in hopes to break the ice between the two of them. Unfortunately, it didn’t seem to work, but that was still one of Kilmer’s favorite moments.

“I gave him an extremely expensive bottle of champagne but placed it in the middle of a giant field and made him follow scavenger-hunt-style clues to find it,” he shares. “I hid behind a bleacher and watched him lug the giant crate to his motorcycle. He never did thank me for the Iceman-style bit. I thought it would break the ice, but I guess the ice was just right.”

Watch a scene of Cruise and Kilmer below in Top Gun.