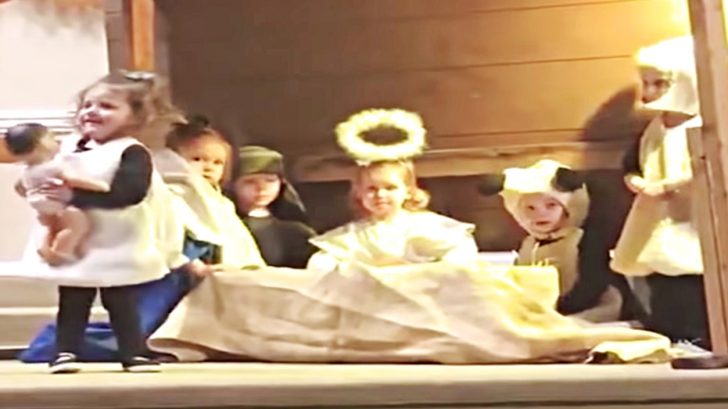 During a class nativity play, one little girl decided to steal the show with some hilarious antics. But not everyone was pleased…

The Choir Of Angels

Sitting around baby Jesus nestled in the manger, the little nativity actors were singing “Away In A Manger.” Written in 1882, the song has been a traditional Christmas tune and is often sung in churches and by carolers during the holiday season.

Their tiny voices rang out as Mary and Joseph looked on at the baby Jesus. But they weren’t the only ones with their eyes on the doll being used…

One sneaky sheep came out of the woodworks and after pulling the blankets off of baby Jesus, snatched up the doll and started swinging him back and forth!

Mary Wasn’t Having It

While the crowd was laughing and giggling at the little one’s antics – Mary was not having it. The two ended up fighting over the doll for a few moments.

Finally, Mary got the doll back into the manger – only to have him snatched right back out! You can watch the whole hysterical scene go down in the video below and let us know what you think in the comments!