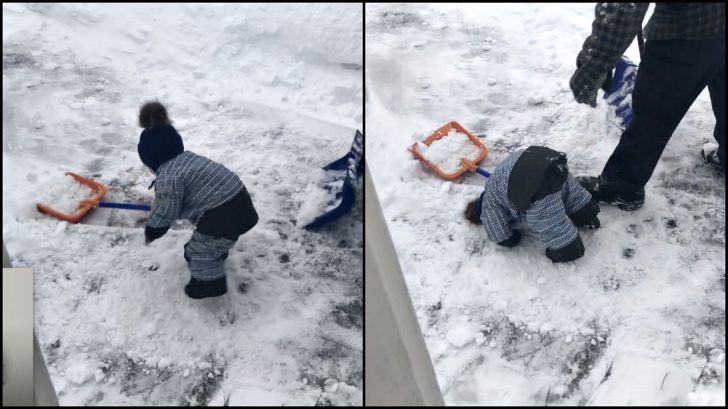 Shoveling snow isn’t for the faint of heart. Just ask 14-month Rory from Canada who has become a viral star after his attempt at helping his dad shovel didn’t quite go as planned.

After snow blanketed the tot’s hometown of Clarenville, Newfoundland, Samantha Burke-Balsom bundled up little Rory so he could help his dad shovel the driveway. Then Samantha got out her camera to film the father-son bonding time and ended up capturing a clip that now has more than 30 million combined views on various platforms.

In the video uploaded to Facebook, little Rory is seen pushing a snow shovel along the driveway with his dad nearby doing the same. But, the boy’s shovel slips and sends him off balance. The unexpected snag causes Rory to slowly tip over, head-first into the snow.

Perhaps the only thing better than adorable Rory’s tumble is his dad’s reaction to it. He simply reaches down, grabs Rory by the back of the coat and sets him back on his feet. Rory, totally unfazed by the fall, picks up his shovel and gets back to work.

“Snow shoveling, the struggle is real,” Burke-Balsom wrote on Facebook. Check out the viral clip below.