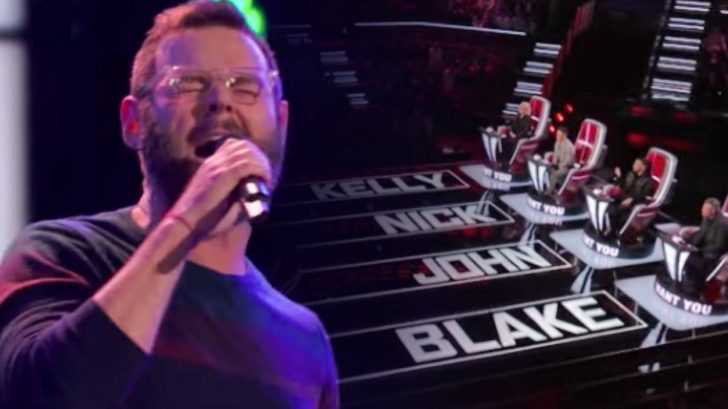 The Voice‘s 18th season kicked off on February 24, 2020 and viewers got the chance to witness some outstanding performances on that debut night.

Blake Shelton, the only coach who has been with the show for all of its seasons, is also the coach with the most wins. He’s won a total of eight times, with his last win being in Season 20. But before that, his previous when was in Season 18.

When the season kicked off, Shelton was determined to find a standout star that could potentially help him claim a winning title. And he found that star in Todd Tilghman.

Tilghman is a pastor and father to eight kids. His wife was there to watch his blind audition, and was cheering him on as he aimed to impress coaches Kelly Clarkson, John Legend, Nick Jonas, and Shelton.

He performed a song that has its roots in rock, but also shares a tie to country. That song was “We’ve Got Tonight,” which was written and originally recorded by Bob Seger. He recorded the song with his band, The Silver Bullet Band.

Later, the song was reimagined as a duet between pop/country star Kenny Rogers and pop singer Sheena Easton. Their 1983 recording was a huge success, and peaked at the top spot on the U.S. Hot Country Songs chart.

The duo’s rendition of “We’ve Got Tonight” also crossed over to claim the sixth position on the all-genre Billboard Hot 100 chart.

“We’ve Got Tonight” has been covered many times since, with one of the most notable rendition coming from Phillip Phillips. He performed the song while competing during the 11th season of American Idol, and went on to win the show.

Tilghman was surely hoping to follow in Phillips show-winning footsteps when he delivered his cover of “We’ve Got Tonight” during his Voice blind audition. The coaches had immediate faith in his talent, as Jonas, Clarkson, and Shelton all turned after hearing him sing for just a few seconds.

Legend turned a little later, giving Tilghman the four-chair turn that so many hopeful Voice contestants dream of.

At the end of his performance, Tilghman was left with a touch choice to make. Which coach would he choose?

Everyone made some convincing arguments, but Shelton’s words seemed to touch him most. “You are so amped up, and it reminds me of why I continue to want to be a coach on this show is to work with people like you,” Shelton said.

In the end, Tilghman chose Shelton as his coach, making him one happy camper!

You can watch the performance that helped Tilghman secure his spot on Team Blake by tuning in to the video below. As we now know, Tilghman went on to win his season, so we’d say he and Shelton made a great team!