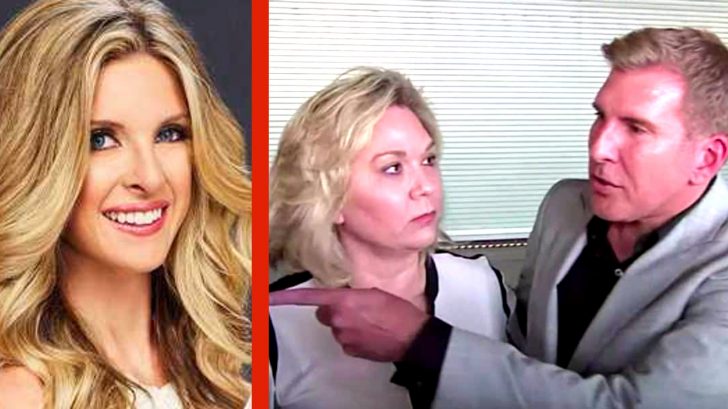 The estranged daughter of famous reality star and real estate mogul Todd Chrisley has made some shocking public claims recently after her father’s indictment on 12 counts of fraud, conspiracy, and tax evasion.

On Wednesday, August 15th, 2019 – The Chrisley’s surrendered to the FBI in Northern Georgia and were taken into custody to be arraigned by a judge and answer to the charges.

According to WSB-TV Reporter Nicole Carr, the Chrisley’s both entered pleas of “not guilty” to the court and were given very-specific bond conditions that included each posting $100,000 bond, and restricted travel until the trial.

The Chrisley’s are required to remain in Middle Tennessee – where they live, can travel to Northern Georgia, and can travel to California for taping their reality show. All travel docs and itinerary must be provided to probation officers beforehand.

In a statement after court – Todd Chrisley explained their outlook on the situation to WSB-TV.

“We stand in our faith, and we stand in what we know is right. We are fortunate to have the counsel that we have, and our family will stick together, and we’ll walk this road because we know that the good Lord will hold our hand and take us through.”

How the daughter is connected…

But as news spread of their legal woes and the documents started spreading online, Todd’s estranged daughter Linsdie Chrisley made shocking accusations against her father and her half-brother Chase Chrisley.

According to People Magazine, and a police report from Georgia obtained by TMZ – Lindsie alleges that her brother and father “harassed and threatened her” over an alleged sex tape.

Nowhere in her claim does she specify who was in the tape with her. She does claim that the reason they were trying to blackmail her was so that she would lie about the financial issues her family is facing – and “if she refused to do so, they were going to release the sex tape.”

Todd Chrisley, who has remained very quiet during this whole financial crimes ordeal – with the exception of his Instagram post proclaiming his innocence – issued an official statement to People Magazine addressing Lindsie’s allegations. And airing some of her own dirty laundry.

“It’s heartbreaking and shameful that these kinds of accusations have to be aired in public. We have tried to keep Lindsie’s extramarital relationships with Robby Hayes and Josh Murray private for her sake since August of 2016,” he said.

On one hand, he’s saying it’s shameful for her to be bringing this up publicly…and on the other, he’s revealing her alleged infidelity and naming names.

This whole situation is getting more wild by the day.

Check out the full video report below.