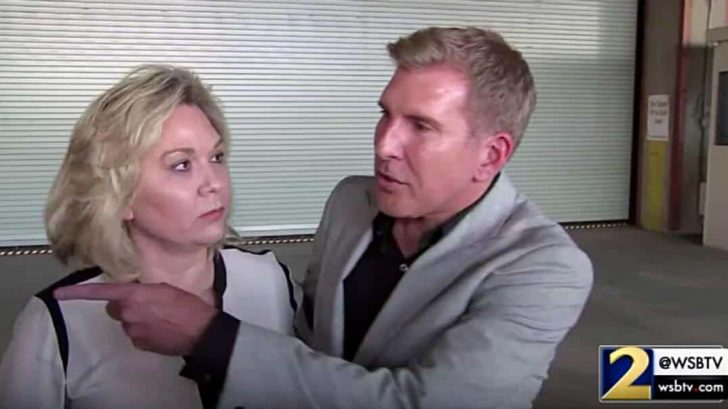 Just short of one month since the famous Chrisley pair were charged with 12 federal counts ranging from bank fraud to conspiracy to tax evasion – the patriarch is speaking out on who might have had a hand in this “troublesome” situation.

Todd Chrisley and wife Julie Chrisley were charged by the U.S. Attorney on August 13th, 2019 with an indictment that claims they defrauded institutions, cheated taxpayers and got fake loans.

Not long after the indictment, Chrisley’s first-born child, Lindsie Chrisley, launched an allegation against her father and half-brother claiming that they were trying to blackmail her with a sex tape. Lindsie and her father have been estranged for several years leading up to this.

Denying the allegation, Chrisley and his second wife, Julie (who is Lindsie’s stepmother), sat down for an episode of their podcast Chrisley Confessions and addressed Lindsie’s claim – along with tackling their legal woes head-on.

“Clearly, it’s all over the news that we have been charged with tax evasion and bank fraud,” Todd said, adding that their not guilty plea “stands for what it stands for.”

“I want you all to know that we stand steadfast in our faith and in our belief system,” he added. “We pray every day for the prosecutors here, we pray that there’s transparency and that they get to see through the evidence that our attorneys have collected over the many years, that these allegations are not true.”

He then went on to explain that he forgives Lindsie and he will always forgive her, adding that no matter what she claims, she will always be his child and he will love her. This is unlike her half-sister Savannah, who says what she’s done is unforgivable.

For the first time since news of the scandal and federal indictments broke, the youngest daughter of Todd Chrisley is speaking out. And she doesn't hold anything back.

“Now, as far as our oldest daughter Lindsie goes,” Todd continued, “I will say to you that we are saying nothing other than that we love Lindsie. She will always be my daughter, that will never change, she is my first-born child. She is loved and this is her moment for her to say whatever she wants to say, regardless of whether or not it’s true or not.”

After touching on that scandal that has been circulating in the news, Todd turned his attention back to addressing the charges against he and wife Julie, revealing a bit but not trying to disclose too much publicly.

He goes on to say that his ex-wife, Theresa Chrisley Terry, has knowledge of being a whistleblower and claims she reached out to his second-born child, Kyle Chrisley, and Kyle’s ex-wife to tell them they should turn Todd and Julie in to the IRS because there’s a “finder’s fee” for whistleblowers.

Todd and Kyle were also estranged up until recently when Kyle posted on Facebook that he had mended fences with his dad. Kyle also claimed that his biological mom was behind all of this trouble in a lengthy Facebook post.

Chrisley’s long-estranged son Kyle Chrisley has come forward about the financial crimes his father and stepmother are charged with.

“…with her knowledge of being a whistleblower and contacting Kyle and his ex-wife, making them aware that they should turn us in because they could collect 30 percent of anything the IRS collects. All of that’s going to come out.”

So far, nothing official has been made public regarding Chrisley’s ex-wife and her alleged role in all of this.