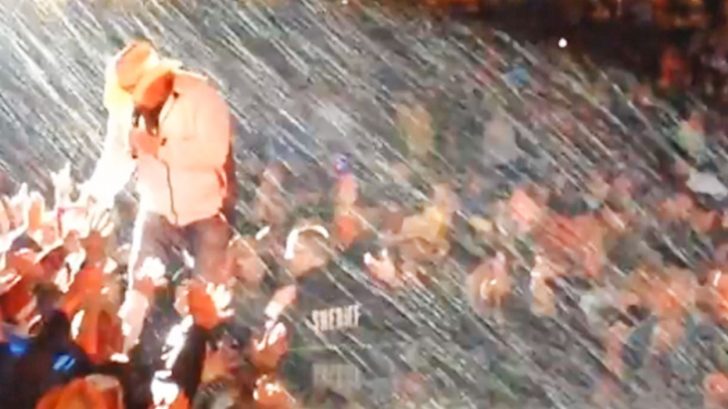 Even though the night was forecasted with extreme weather conditions, it didn’t stop Toby Keith from putting on an epic hour-and-a-half show for his fans in Minnesota at Winstock Festival in 2014.

Headlining the two-day festival, Keith was scheduled to perform a set filled with his hits including “How Do You Like Me Now?”, “Courtesy of the Red, White, and Blue,” and “Should’ve Been A Cowboy.”

Earlier performances from Justin Moore, Jerrod Niemann and Katie Armiger were cancelled “due to lightning,” according to a press release from Winstock Festival’s website, but Keith braved the heavy rain for his devoted fans.

“Thanks for rocking in the rain  Winstock! #YouStayedIplayed #wegotwet #bestfansever,” Keith wrote on his Facebook page after the show.

In Keith’s mindset, as long as there were fans willing to brave the rain to see him, he was willing to do the same for them. He first posted this insane video immediately after the performance, but just recently re-posted it to show just how dedicated he is to his fans.

“Ain’t no stoppin’ this cowboy,” he wrote on Feb. 5 accompanying the video.

According to comments on the original video, posted June 14, 2014, there was, in fact, lightning while he was performing.

Keith could have played it safe by staying dry and singing all his songs under the overhang. Instead, he acted as though it was any other show, high-fiving his fans from the stage and not caring at all that he was getting soaked. As you can see in the video below, it was really coming down!

Ain't no stoppin' this cowboy. Check out this clip from Winstock Festival.