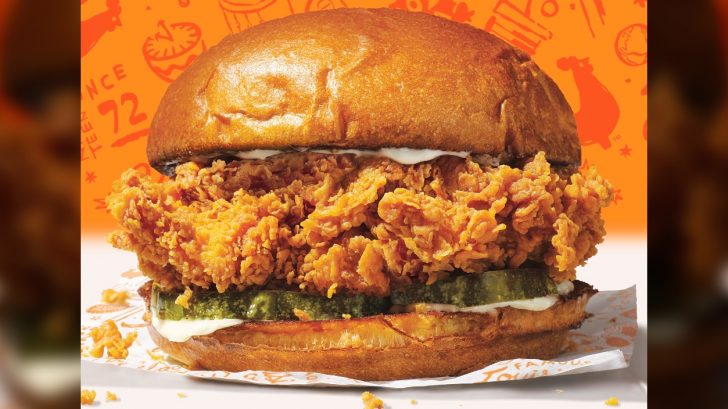 This past summer, Popeyes Louisiana Kitchen made waves when they released their limited run of their fried chicken sandwich on August 12.

Just a week later, the sandwich was so popular thanks to the restaurant chain’s tweets, battling with other fast food chains, like Chick-fil-A over the quality of their chicken sandwich.

According to Newsweek, Popeyes thought they would have enough for a six-week run of fried chicken sandwiches, but due to the popularity of them, they ran out in two weeks.

A man from Chattanooga, Tennessee named Craig Barr sued Popeyes in August after the chain ran out of fried chicken sandwiches. Newsweek reports that he “is seeking $5,000 after allegedly experiencing emotional damages and wasted time.”

In his pursuit of a fried chicken sandwich from multiple Popeyes locations, Barr claims his vehicle was damaged, which he thinks the company should take responsibility for. He says the damage to his tire rim costs $1,500 and alleges it was caused by one of the many parking lots he drove in. Apparently it is close to a sewer.

“There’s one spot where your foot can go all the way down in the sewer,” Barr said. “I mean you know someone could get hurt.”

Barr claims Popeyes failed to live up to its promise of selling a fried chicken sandwich and thinks that the locations he went to were never stocked to sell the sandwich.

“You go to one location, they are like ‘come back tomorrow,” said Barr to WRCB. “I talked to managers who never even ate a sandwich they never even got a sandwich there never was a chicken sandwich at the East Ridge location.”

In August, Barr told the Chattanooga Time Free Press, “I can’t get happy; I have this sandwich on my mind. I can’t think straight. It just consumes you. It’s totally deceptive. Who runs out of chicken? It’s a big fiasco. Someone has to stand up to big corporate. Everyone is captivated by these sandwiches. They’ve got everyone gassed up on them.”

Barr was so desperate to get his hands on a fried chicken sandwich, he paid someone off Craigslist $25 who claimed they had an inside connection to the item, but was “scammed.”

A trial date was set for January 8. Popeyes says they will permanently put the item on the menu on November 3.

Y’all…the sandwich is back Sunday, November 3rd. Then every day. ?? pic.twitter.com/JDxyCIv0zz

Barr said if can can “do it safely,” he might try to buy one again.