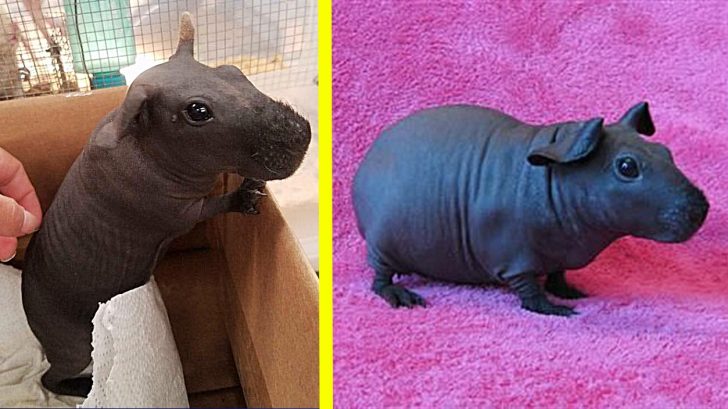 These guinea pigs, technically known as Skinny Pigs, are a breed that’s almost hairless with only having hair on their muzzle, feet, and legs, but hairless on the rest of their body. Skinny Pigs are smooth, wrinkly skinned creatures that come in different patterns and colors, such as Dutch, Tortoiseshell, or Himalayan.

The post has reached over 43,000 shares, 12,000 comments, and 4,500 thousand reactions. Some people were sharing pictures of their house hippos and telling stories of the ones they had in the past as a pet.

Other than the lack of hair, these beautiful little creatures are not physiologically different from a regular haired guinea pig, however, they do need to eat more to maintain body heat. If exposed to the sunlight for too long, they can become sunburned just like human skin.

It’s recommended that guinea pigs are kept inside the house and have plenty of nesting material so they can blanket themselves if they get cold. They are known to be gentle and love cuddling, and people who’ve owned them say they make the cutest little sounds.

“I like having him because he’s just so darn cute and he’s the closest I’ll ever get to having an actual hippo,” a huge hippo fan told Insider.

Watch A Video Of The Naked Guinea Pigs Below