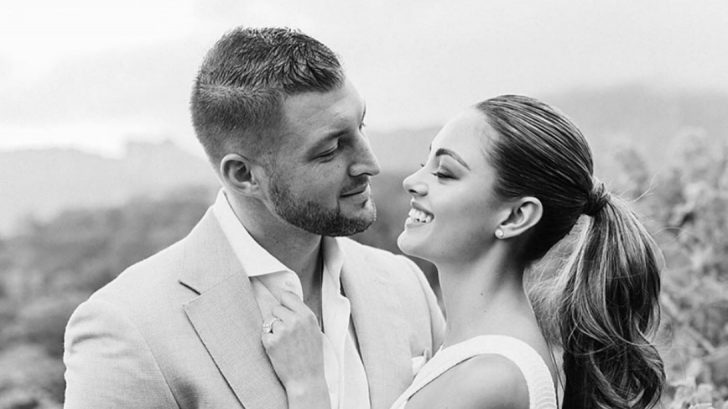 The couple said “I do” at the La Paris Estate in Cape Town, South Africa on Monday night, PEOPLE magazine reports. During the 30 minutes ceremony, in front of more than 250 guests, Tebow and his bride exchanged vows they had written themselves.

“I want the vows to be perfect,” Tebow told PEOPLE. “I’m leaving in the traditional things like ’till death do us part,’ but I’m also adding some of my own things to it.”

The bride, 24, wore a custom gown from David’s Bridal while Tebow wore a tuxedo by Antar Levar. The ceremony topped off a multi-day event that featured a welcome reception and rehearsal dinner that mixed the couple’s traditions. Both shared highlights of the pre-wedding celebrations on social media.

32-year-old Tebow revealed he was most looking forward to three moments in particular…”The first moment I see her in her wedding dress, the first kiss, and the first dance together as man and wife. It’s such a special night.”

He added, “I’ve been waiting my entire life for someone special, who I can spend the rest of my life with. I was waiting for the right person to come along. And now I’m marrying Demi. I can’t wait to see what our future holds. All of my dreams have come true. It was 100 percent worth the wait.”

Tim shared a photo of himself and his new bride on social media after the wedding with a caption that simply read, “Forever.”

The former NFL quarterback proposed to Demi one year ago at his family’s farm in Florida.

“The couple strolled along the property and stopped next to a small lake where Tebow had installed an arbor and a specially made bench that was engraved with the date the couple first met,” PEOPLE reported at the time. The couple spent several minutes talking about their relationship. Tim then dropped to one knee and said, “Demi-Leigh Nel-Peters, I love you. Demi-Leigh Nel-Peters, will you marry me?” Demi accepted as Tim slid a 7.25 carat diamond ring onto her hand. “This ring is internally flawless. Just like you,” Tebow told her.

Tebow had secretly flown Demi’s family in from South Africa so that they could be there to help them celebrate their engagement. The beautiful moment was captured on film. See the footage in the video below.

Congratulations to Tim and Demi!

A year ago today, you made me the happiest man… I can’t wait to spend the rest of my life with you @demileighnp #TyingTheTebow