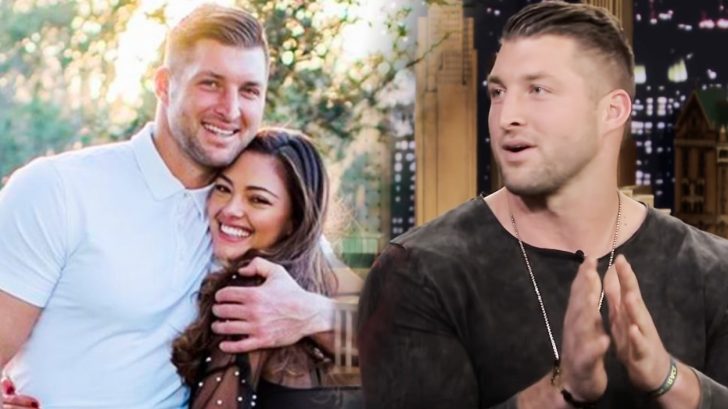 Just a couple days before he has to report for training camp with the New York Mets, Tim Tebow stopped by The Tonight Show Starring Jimmy Fallon to talk about his recent engagement, his foundation, and his upcoming film Run The Race, in which he served as one of the executive producers and made a cameo as himself.

When Tebow sat down with Fallon, the talk show host congratulated him on his engagement to Demi-Leigh Nel-Peters, former Miss Universe and Miss South Africa, and asked how the proposal went down!

Of course, Fallon – like the rest of us – saw their incredible announcement on social media where Tebow wrote, “[Demi-Leigh], Thank you for saying YES and making me the happiest man in the world. You’re the love of my life, and I can’t wait to spend the rest of my life with you.”

@demileighnp Thank you for saying YES and making me the happiest man in the world. You’re the love of my life, and I can’t wait to spend the rest of my life with you. • • [email protected]

Tebow let Fallon in on a little secret about his elaborate proposal: “Any good surprise starts out with a lot of lying.”

He explained that they were celebrating Christmas with his family, and to throw her off, he had a car dealership come to “fake surprise” his dad with a brand new truck! Tebow took her to the backyard, which was decorated beautifully as you can see in the photos above, and got down on one knee to ask her to marry him.

After she said yes, he suggested they listen to a very special song to them called “The Wedding Song” by South African artist Matthew Mole.

“So we were dancing to it, and then he comes from behind the arch and starts singing it in real life,” Tebow said, revealing that Nel-Peters was shocked. But the surprises didn’t stop there!

Her entire family lives in South Africa, so Tebow flew them all out and had them surprise her after the proposal. Then he had yet another surprise – all her best friends were there too!

Not only did he jump through all those hoops to make it a perfect moment for his future wife, he also had a very smooth line after he put the ring on her finger.

What a year @demileighnp! what’s crazy is I knew from day 1! You inspire me everyday with your kindness, sweetness, and courage! I don’t think it’s possible to love you more, but I know I will tomorrow and everyday after! My sweets! My universe! I love you! ? @kellybramanphotography

Fallon guffawed, telling Tebow how hard he is making it for all the rest of the men in the world for pulling on an epic proposal! Watch the former quarterback talk about it in the video below.