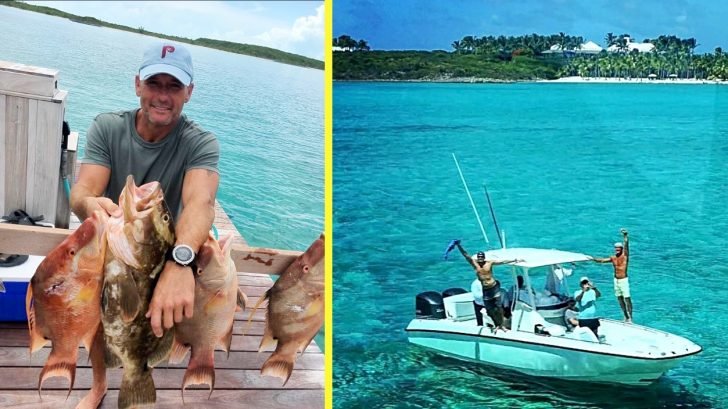 This country hitmaker just got done releasing two brand new songs off of his forthcoming album, but that doesn’t mean he had taken a break from doing some of his favorite island activities…and those appear to have caught up with him!

Way back in 2003, McGraw and wife Faith Hill purchased a very-exclusive private island in the Bahamas they named “L’île d’Anges” – but they didn’t actually move in there until 2012 after they had the island custom built with a series of inter-connected pavillions.

In an exclusive piece with Architectural Digest, they took the wraps off their island paradise for the very first time and allowed cameras into the sanctuary that they have called “otherworldly.”

While he’s out taking a break from the hustle and bustle of showbusiness, McGraw often likes to go spearfishing on the island and partake in some beachside volleyball – along with cliff diving! But it seems to have caused an injury he was not expecting…

Plunging into summer with inspiration from @faithhill and @thetimmcgraw’s private island in the Bahamas. “We’ve been all over the world,” Hill tells AD. “We really wanted to create a special place we couldn’t find anywhere else.” See the breathtaking family home they worked on for almost a decade in our July issue on newsstands now. Photo by @wabranowicz

“Every time we land the plane and walk onto the beach and head up to the house, we turn to each other and say, ‘This is the best place in the world,’” @thetimmcgraw says of the Bahamian home he and @faithhill built for their family. The home is actually a collection of 8 distinct “pavilions” connected by thatch-roof loggias and essentially runs as a small town since it is the only property on the island. Get a closer look through the #linkinbio Photo by @wabranowicz

Taking to social media earlier this week, McGraw showed off his nicely-booted foot explaining that he had broken it after “too much spearfishing and beach volleyball…”

He looks cozied up at his Nashville home and is kicking back on the couch while he elevates his foot. The photo shows off some of the decor he and Hill have brought into their home, and it looks like there could even be some marks on the doorway where they measured the kids’ height over the years.

Too much spearfishing and beach volleyball… 2 stress fractures

McGraw suffered from two stress fractures that likely came from his abundant athleticism, which includes many hours in the gym to keep his six-pack abs in tip-top shape!

We are wishing Tim McGraw the best during his recovery and hopefully, he’ll be back on his feet in no time!

Check out their full island tour below!