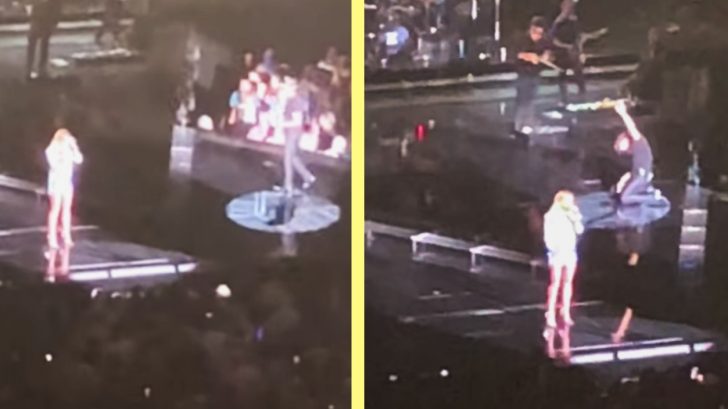 Two of the biggest names in country music were on tour in 2018, but there was one stop in Minneapolis, Minnesota that had a moment nobody will forget. And this wasn’t the first time these two tackled the famous Twin Cities.

Taking the stage during their Soul2Soul World Tour, Tim McGraw and Faith Hill performed their usual duets and hit singles from their solo careers, but there was an impromptu moment when Faith Hill took the stage to perform a tribute to Prince that literally brought her husband crashing to the ground.

Tim McGraw Collapses On Stage In Awe Of Faith Hill’s “Purple Rain”
When she hit that note…his knees gave out. https://t.co/mdUdEnscLy pic.twitter.com/DrIn2IgQOR

Her Vocals Rang Out Across The Arena

Minneapolis, which is Prince’s hometown, was the perfect place for Faith Hill to try her hand at one of his biggest hits – “Purple Rain.” And as she spoke to the band, asking for a note, Tim was walking along the other section of their custom stage.

It Brought Him Crashing To The Ground

Just seconds later, and Fath Hill is belting out the first few notes of “Puple Rain” when Tim McGraw collapses out of sheer awe – throwing his hands in the air and giving his band a look of complete and utter disbelief.

Watch the entire video below as the audience gasps in response to what they’ve witnessed before their eyes.