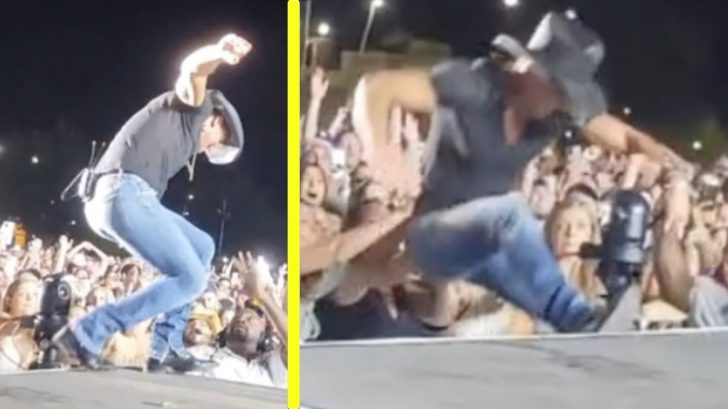 A post shared by Boots In The Park (@bootsinthepark)

During McGraw’s headlining set, he brought out Lynch and Hurd for a rowdy rendition of “I Like It, I Love It.”

A post shared by Boots In The Park (@bootsinthepark)

At one point during his set, Tim McGraw was standing near the edge of the stage when he turned around to kneel and point at something. As he tried to get up, he stumbled and completely fell off the stage! A security guard saw it happening and tried to catch him, but wasn’t able to.

McGraw took this as an opportunity to hug and high five his fans standing in the first few rows. TikTok user “whodis88” joked that McGraw’s tight jeans were the reason for the tumble.

The TikTok video stated that McGraw was okay and continued his show after the fall.

Watch it in the video below.

@whodis88 Helluva concert good ol @timmcgraw put on last nt. Glad he was ok and was up meeting the crowd. #timmcgraw #dadsoftiktok #navajonation #navajotiktok #bootsinthepark #tempeaz #arizona #countrymusic #foryou #xyz123 ♬ I Like It, I Love It – Tim McGraw