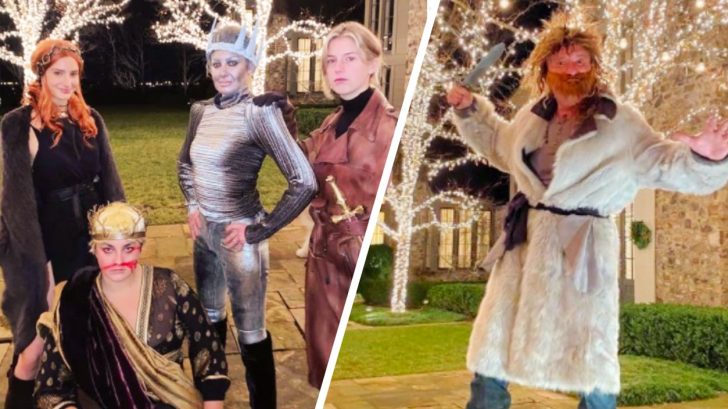 Tim McGraw, Faith Hill, and their three daughters are ringing in the holiday season by hosting fun family dinners…including costumes!

One night, they all dressed as characters from the hit musical Hamilton. As youngest daughter Audrey explained in the comments of one Instagram post, everyone drew names out of a hat to see which character they would be. She ended up being Maria Reynolds.

Big sister Gracie dressed as George Washington, and shared a series of photos showcasing her costume. It was pretty on point!

Middle sister Maggie also shared some pictures from her family’s Hamilton night. She posted a group snapshot that shows how her mom and dad dressed up for the occasion.

It seems the McGraws were also accompanied by a few of the girls’ friends, who joined in on the fun and dressed in their own costumes.

The following night, the McGraws decided to dress as characters from the TV series Game of Thrones for another family dinner party.

Gracie and Tim both shared slideshows showcasing how they dressed up for that particular night. Gracie included a bunch of photos in her slideshow, including one photo at the end that shows the whole group.

As for Tim, he shared two photos from the family’s Game of Thrones night. The first picture he posted shows Faith with all three of their daughters.

The second picture Tim posted is of him on his own…and it seems he was really getting into character!

“So we had a ‘Game of Thrones’ themed dinner at home with the kiddos,” Tim captioned the pictures before wishing his followers a “Merry Christmas!”

Look below to see the photos Tim shared from his family’s Game of Thrones night.

Does your family host costumed dinner parties like the McGraws? It seems like a fun way to spend the holiday season!