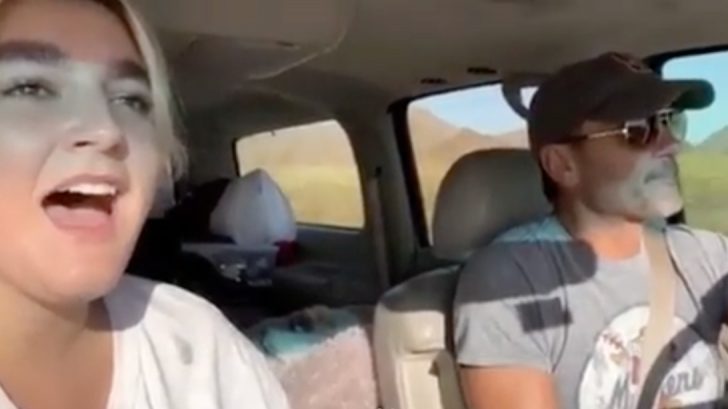 The apple doesn’t fall far from the tree where Tim McGraw and Faith Hill’s daughters are concerned. Gracie, Maggie, and Audrey have all inherited their famous folks’ singing skills, and Tim and Faith haven’t been shy about bragging on their kiddos.

In 2014, then-12-year-old Audrey made an impromptu performance of the Dixie Chicks’ “Travelin’ Soldier” during a VIP session for her dad’s Sundown Heaven Town Tour.

Even the duo’s middle child Maggie inherited the singing gene. While she has taken the stage at a concert of Tim’s years ago, it appears that Maggie’s favorite stage is the car where she and Faith have passed time on road trips doing their own versions of carpool karaoke.

A new video posted by Tim McGraw shows the true extent of the talent of their oldest daughter, Gracie. The video posted by Tim to social media shows him driving as Gracie rides shotgun. Gracie films as the pair sing along to “What Kind of Fool,” the 1981 Barbra Streisand duet with Bee Gee’s frontman Barry Gibb. Gracie’s vocals drown out Streisand’s as she sings and we were in awe by what we heard. The eldest McGraw daughter didn’t hold back as she sang the classic ballad, her rich, powerful voice giving Streisand a run for her money.

We wholeheartedly agree with Tim who said, “PIPES!!!!!!……Dang, this girl can sing!” Check out Tim McGraw and Gracie’s impressive carpool karaoke performance below and let us know what you think!

PIPES!!!!!!……Dang, this girl can sing! Gracie and I having fun with Babs and Barry on our trip #chaseyourdreamsgirl