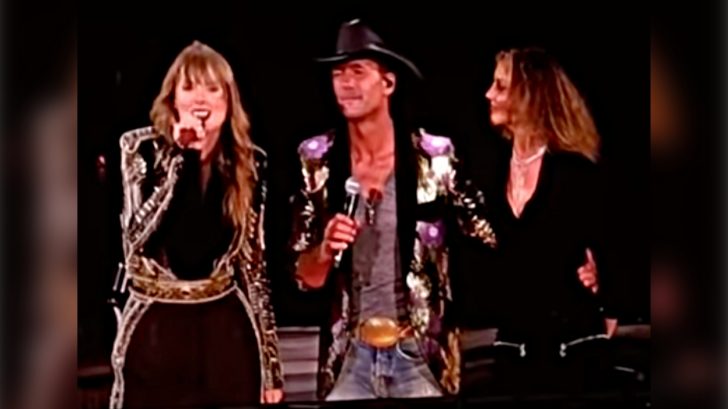 Taylor Swift returned to her old stomping ground on August, 27th, 2018 when she brought her Reputation Stadium Tour to Nashville. And, just as you would expect from Taylor, the night was full of surprises, but perhaps the biggest surprise was when she brought Faith Hill and Tim McGraw on stage to sing her debut single, “Tim McGraw.”

Taylor Swift and Tim Mcgraw performing together throughout the years pic.twitter.com/MIpfgO7wRU

Swift released “Tim McGraw” as her first single in 2006 and had the honor of singing the song to the man himself at the ACM Awards in 2007.

But, this 2018 performance was the first time the two sang the song together. Taylor kicked off the song seated at a grand piano on stage. The crowd sang along with every word, even though it’s been more than five years since Swift has included the song in her setlist. Prior to the second verse, Swift surprised the crowd by inviting Faith Hill to join her. The crowd screamed with excitement that only got louder when Taylor introduced Tim McGraw himself.

there was once a very brave girl who went up to Tim Mcgraw and introduced herself, her name was Taylor Swift. She then went to be the opening act of Tim and his wife, Faith Hill. In 2018, Tim and Faith are guests at Taylor’s show, in her stadium tour. Y’all mind if I cry? pic.twitter.com/BdmpAdPNQI

Taylor, Tim, and Faith shared the stage for what has quickly become one of the most talked performances in recent concert history.

Taylor Swift’s return to Music City was sentimental for the country-turned-pop singer who got her start as a pre-teen knocking doors on Music Row.

“I came here at 11 years old with a CD of karaoke music, and my mom drove me up and down Music Row. I would scamper into record labels and say, ‘Please call me,’” Swift recalled to the audience. “This is the city where I learned how to write songs. Every single thing I do, I learned in Nashville.”

Watch Taylor Swift sing “Tim McGraw” with Faith Hill and Tim McGraw in the video below.