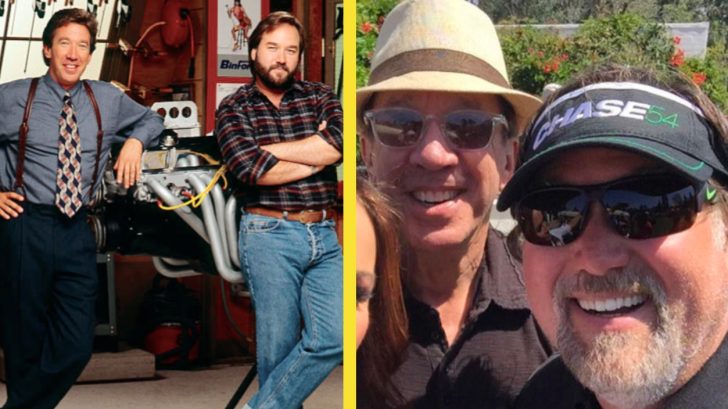 One of the best duos of the 1990s was Tim Allen and Richard Karn, better known as Tim “The Tool Man” Taylor and Al Borland from the hit sitcom Home Improvement.

For years, fans have asked for a reboot of Home Improvement, or at least a reunion and in a new announcement – they are sort of getting both of those things!

Fans took notice of these clues and tried to guess what the old friends were up to, while throwing it back to some classic Home Improvement moments.

Just one day later, on Tuesday, August 25, Allen confirmed what the news was on Twitter – that he and Karn will be joining forces again on television!

Allen tweeted, “I’ve always admired people who repair something instead of replace it. So, I created a competition show with @HISTORY, and my old buddy @TheRichardKarn, to challenge the people who love to get stuff done!”

I've always admired people who repair something instead of replace it. So, I created a competition show with @HISTORY , and my old buddy @TheRichardKarn , to challenge the people who love to get stuff done! pic.twitter.com/EEVHKRPFum

According to Entertainment Tonight, Allen and Karn’s TV show is called Assembly Required and will showcase “the brightest builders from across the country [who will] breathe new life into everyday household items in desperate need of fixing.”

The show, which has been given the green light for 10 episodes, will air on History beginning in 2021.

In a statement, Allen said, “Let’s face it — we’re living in a throwaway society. We buy, break, replace… rinse and repeat. Whatever happened to repair and rebuild? There are some people who unfriend, unfollow and dispose of anything that offends, annoys or breaks – so I’ve created a show to remind people of the satisfaction and pride that comes from rebuilding something on their own.”

Is anyone else excited to see this duo back on screen together? We are!

Check out a clip of all the times the Home Improvement cast appeared on Allen’s show Last Man Standing below.