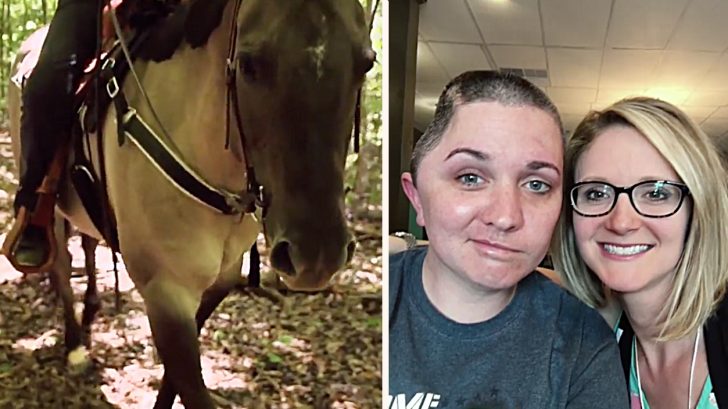 A woman who got thrown off a horse and fractured her skull says she was healed through prayers after the doctors told her family she would probably not remember who they are after the surgery.

Tabitha Hale, her husband Jacob, and four sons were visiting her family when the guys decided to have an adventure. Since the guys were doing their own thing, Tabitha and her mom decided to go horseback riding in the countryside.

They were riding along just fine when towards the end of the trip Tabitha’s horse saw the barn and decided to take off at full speed towards it. Tabitha was a novice rider so her mom started yelling to her, “Hold on Tabatina, hold on baby, just don’t panic,” she said in a CBN interview.

The horse moved too quickly and got far ahead of her mom. When her mom finally caught up she saw Tabitha laying face down on the ground with blood coming out of her ears. She got off her horse to help her but Tabitha didn’t remember where she was and weirdly didn’t seem herself, so she called 911.

“When I came around the corner, she was lying face-down,” her mother Kim told CBN. “I jumped off my horse and ran up to her, and she was non-responsive. I just held her in my arms and called 911.”

Once an ambulance arrived they took her to the Northeast Georgia Medical Center in Gainesville where doctors examined her and said that Tabitha had a fractured skull. They immediately took her into the surgery room and removed parts of her skull to relieve the pressure from her brain swelling.

As they were operating, the family asked the nurses about her condition and they had to be honest with the family. The nurses told them that they didn’t know if she’d make it through the surgery and if she did, she probably wouldn’t be able to walk or talk. She’d have to relearn all those things again.

Once the surgery was over, doctors put her on a ventilator in the ICU and placed her in an induced coma. They figured this was the start to a six-month or more healing process. The family feared the worst and resorted to the only thing they could do, they began to pray.

The very next day Tabitha miraculously woke up on her own, wiggled her toes and recognized her family. The doctors were in shock and said it was a miracle. By day two she was off the ventilator and breathing on her own.

After nine days in the hospital, Tabitha was released to go home. Within three months she was back at her job working again as an administrative secretary for the City of Oakwood. She healed so fast that in six weeks she was brought back in to have surgery on replacing her missing skull fragments.

Tabitha even got back on a horse again and returned to doing the normal activities she loved. Take a look below at her full story told in an interview video.

A day out turned deadly when Tabitha fell from her horse and her brain began to swell. Doctors weren’t sure she’d survive without permanent damage, but the following months surprised everyone.Watch her full healing testimony or read more here: http://share.cbn.com/5zf8i