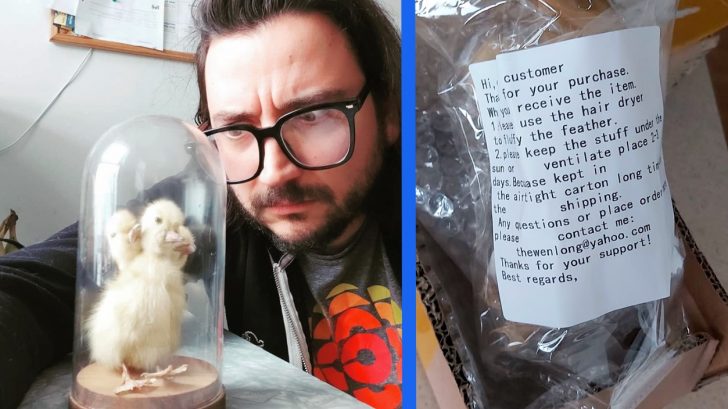 42-year-old Brent Braaten from Nova Scotia, Canada said he received a three-headed duck in the mail labeled from China and he has no idea why it was sent to him.

“As I tore into the plastic a duckling’s head emerged. I physically jumped back from the package. I was shaken – no one expects a dead animal in the mail,” LadBible reported Brent saying.

Brent went on to say that he gathered his courage to investigate further into the strange packaging and when he did, he noticed the bizarre taxidermy duck had two other heads!

“Someone had sent me a mutant three-headed duckling in the post!” Brent said, “It was addressed to me so I feel like it was either sent to me by a friend who wanted me to experience a whimsical mystery or an enemy who wanted me to possess a cursed object.”

He was asked if he was sent the duck by someone out of some sort of revenge but Brent said he does not think he has wronged anyone enough for them to do something like this.

“I’d like to think that people generally like me and consider me an affable guy,” he noted. “I’ve had some bad breakups, though, so it could be an ex-lover.”

He looked through all his bank statements and receipts and didn’t find any evidence that he ordered the duck himself potentially on accident.

“I work at Good Robot Brewing Co. and a week after a staff party we were delivered a 20-foot-tall wacky inflatable waving spaghetti arm man that had certainly been purchased during that party,” Brent explained. “But I have scoured my bank records. There are no mysterious transactions.”

All that was in the box beside the three-headed duck was instructions for it to be ventilated for two to three days and to use a hairdryer to fluff the feathers. Brent shared photos and videos of the duck on Facebook so others can see the strange mystery gift.

Check out one of Brent’s videos below.