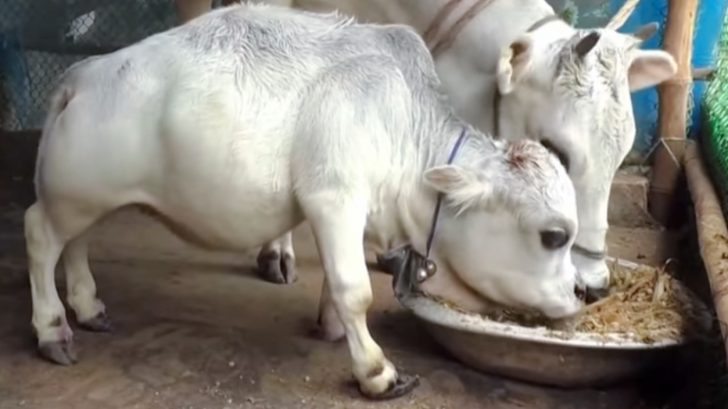 There’s a fully grown 23-month-old Bhutanese cow in Bangladesh named Rani that is in the process of becoming the Guinness World Record holder for being the smallest cow in the world.

“I have never seen anything like this in my life,” visitor Rina Begum told BBC News.

The miniature heifer stands only 20 inches tall and weighs 57 pounds, which is about the size of a pet dog. Once all her measurements are verified by Guinness, she will easily beat the current record-holder, Manikyam, who stands 24 inches tall.

Manikyam is a Vechur cow who is also from India, she too weighs 57 pounds. She claimed the Guinness World Record in June of 2014. Now that Rani is looking at taking the record, she is getting a lot of attention.

“More than 15,000 people have come to see Rani in the past three days alone,” the manager of the farm said, according to France24. “Honestly speaking, we are tired.”

Thousands of people continue to flock to Rani to take pictures, videos and see her in person. The veterinarian says he’s very concerned for Rani’s health as more people travel to visit.

“I told them they should not allow so many people to crowd the farm. They may carry diseases here that threaten Rani’s health,” Sajedul said.

As for why she is so small, the government’s chief vet for the region, Sajedul Islam said that Rani is so small because she’s a product of “genetic inbreeding” and is unlikely to become any bigger. Check out video footage of Rani in the video below.

View Footage Of Rani Below