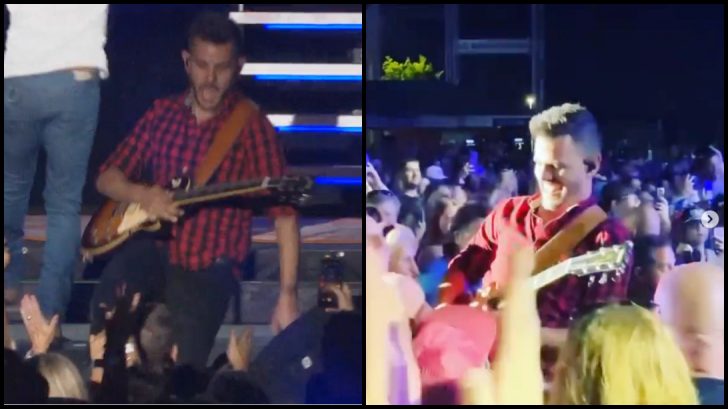 It’s not all that uncommon for a performer to tumble on stage, or fall off of it (just ask Luke Bryan). But, we don’t often see band members take a fall and keep on playing.

That’s exactly what happened to Thomas Rhett’s guitar player, Nathan Whitney, during a recent concert at Hershey Park Stadium in Hershey, Pennsylvania. A video posted to social media shows Thomas Rhett performing his 2016 hit “Vacation” when Whitney did a power slide down center stage. Instead of stopping at the end of the stage, the guitarist slid off the end and landed in the crowd.

And now I’m a GIF. pic.twitter.com/mCnipb5OJa

According to those in attendance, Whitney kept on playing without missing a beat. Whitney shared the video to his social media along with another clip that shows him continuing to play in the crowd before climbing back onto the stage.

Other than a couple of banged up knees (per a photo posted to his Instagram story), Nathan Whitney seems to be okay after the fall.

Not everyone who falls off a stage is so lucky. In 2012, Luke Bryan fell off the stage during a concert in Iowa, followed by a fall a year later in Panama City Beach, Florida. In 2014, the “Crash My Party” singer basically leapt off the stage in Indianapolis and again in Charlotte, North Carolina…a fall that left him with a few stitches.

Perhaps the artist most serious injured by a fall from the stage was Foo Fighters frontman Dave Grohl who suffered a broken leg when he fell during the band’s concert in Sweden.

“I think I just broke my leg. I think I really broke my leg,” Grohl told the crowd while he was on the ground. The musician was taken to the hospital for treatment, but reportedly returned to the stage an hour later via a stretcher and performed with a broken leg for another two hours.