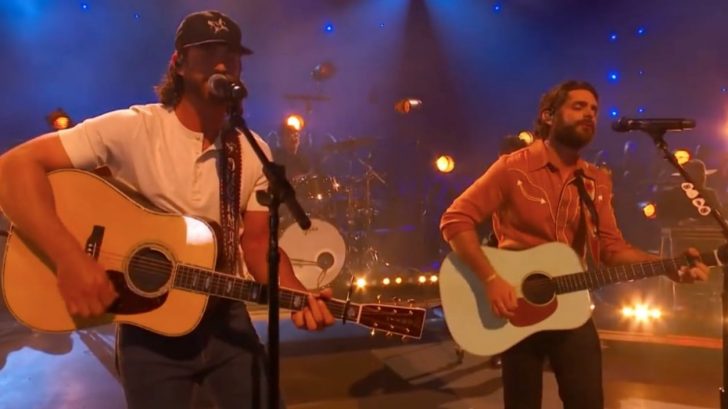 The 2022 CMT Music Awards had an extensive lineup of performers. Longtime artists such as The Judds and Kenny Chesney performed during the same ceremony that also tossed a spotlight on today’s biggest stars, such as Cody Johnson and Carly Pearce.

There were also plenty of collaborations for fans to enjoy. One collaboration was announced a little later than the others, so it came as a surprise to fans.

Just four days before the ceremony, CMT revealed that Thomas Rhett and Riley Green would be performing together during the show.

Rhett and Green collaborated on a song that appears on Rhett’s new album, Where We Started. The song is titled “Half of Me.”

During a show in September 2021, Rhett recalled how their duet came to be. It had not been released at that time:

“He literally drove from Alabama that day and came and sang on the record of mine and this song is not out, but we thought we’d play you something new if that’s okay with y’all tonight.”

“Half of Me” has since been released. Rhett and Green also shared a lyric video for the song.

It made perfect sense for the duo to sing “Half of Me” during the CMT Music Awards. It was their first time ever performing the song at an awards ceremony!

Tune in to the clip below to see Rhett and Green’s duet at the CMT Music Awards. They make a good team!