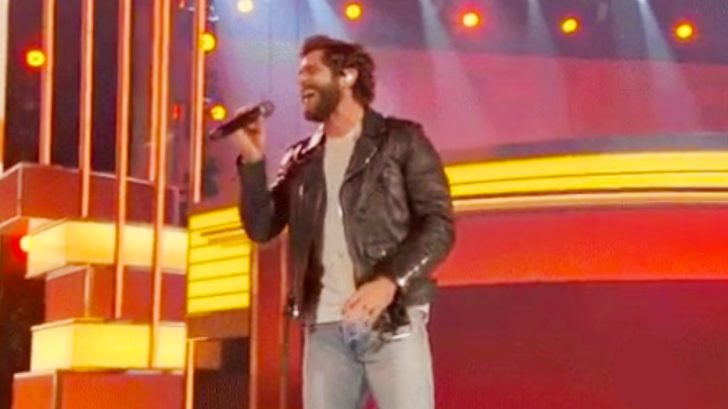 A Country Love Story Makes Its Way Into Song

By now, you should know that Thomas Rhett has mastered the art of writing catchy love songs. And you should also know that all of those love songs you hear him singing have been inspired by one person…his wife, Lauren.

Thomas and Lauren were childhood friends, and eventually, the two decided to date. But things didn’t work out, and they went their separate ways. In fact, Lauren nearly married someone else.

Knowing how close he came to losing the love of his life, Thomas later reflected on Lauren’s near-marriage to another man in his song, “Marry Me.”

But the sad tale that plays out in “Marry Me” is simply Thomas wondering “what if,” and actually didn’t become his reality. He and Lauren found their way back to each other and soon fell in love all over again.

The couple married in October 2012 and now have two daughters, Willa Gray and Ada James.

T H A N K Y O U J E S U S for my sweet little family ?? (also thankful for my fur babies not pictured here??) This day 2 years ago we were spending Thanksgiving in Uganda trying to get our first baby girl, Willa Gray, home?-it was also 2 weeks before I got a “stomach virus” in Africa that actually turned out to be our second baby girl, Ada James?. I hope I never take for granted our family all being together here because I very clearly remember 2 years ago desperately wanting to be in my home with my baby and my family, and now here we are 2 years later???????. And now my baby has a little sister ??. #thankfulheart

All The Songs That Honor Lauren

Other than “Marry Me,” Thomas’ relationship and life with Lauren has inspired a number of his biggest hits and many other songs. Just a few of those songs include “Life Changes,” “Unforgettable,” and “Star of the Show.”

Of course, Thomas’ most well-known ode to Lauren is his 2015 single “Die a Happy Man.”

With a new album set for release in May, Thomas has a wealth of new songs to share that have been inspired by the love of his life. The first of those songs to be made public was the poppy “Look What God Gave Her,” a song Thomas says was inspired by Lauren 100%.

“‘Look What God Gave Her’ to me is a song about my beautiful wife, inside and out,” he said in a press release. “How amazing she is, how funny she is, how caring, how much of a great mom she is.”

Fans loved the song as soon as they heard it, and sent it skyrocketing up the charts. So when it came time for Thomas to perform at the ACM Awards on Sunday (April 7), “Look What God Gave Her” seemed like the perfect song to sing.

With Lauren watching from the crowd, Thomas stood on the ACM Awards stage and sang to the whole world about how incredible she is as a person, wife, and mother. The camera kept cutting to show Lauren’s reaction, which was the sweetest!

Currently me obsessing over Thomas Rhett and his wife. #ACMawards pic.twitter.com/48baVvA5Qv

We think it’s safe to say that Thomas won everyone over with his heart-melting performance. But the person he impressed the most was clearly Lauren!

You can watch Thomas honor his wife at the ACM Awards by tuning in to the video below. This has to be one of the sweetest things y’all have seen in ages.