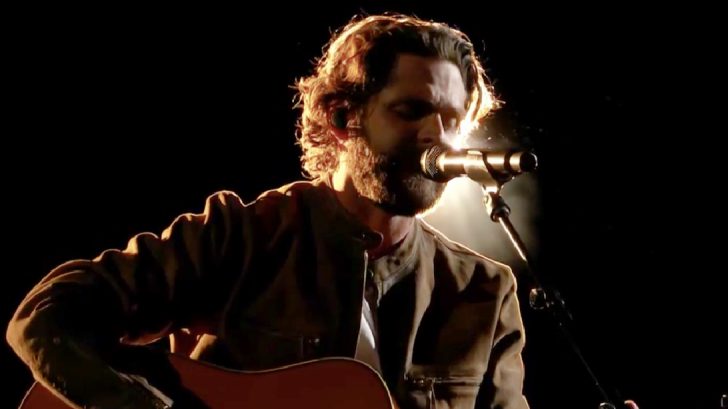 Reigning ACM Entertainer of the Year, Thomas Rhett, took the stage during Sunday night’s live award show to perform a medley of two of his songs: “Country Again” and “What’s Your Country Song.”

Thomas Rhett performed the medley as he stood alone on stage accompanied only by his guitar. The “Life Changes” singer teased the performance in an interview prior to the show, saying: “It just feels like where I’m at today. I’ve never gotten to just sit down with a guitar at an awards show before and play. Which is terrifying to me as well because I’ve got to play it right….it’s gonna be a special moment.”

As promised, T.R. kicked off the medley with a portion of “Country Again,” a song that he says inspired his entire new album of the same name.

From “Country Again,” Thomas Rhett joined his band for “What’s Your Country Song,” a tune that pays homage to T.R.’s upbringing and the songs that shaped him as an artist.

“I just noticed that whether I was in Los Angeles or New York, or Seattle or Nashville, or anywhere in between, I just kinda noticed that everybody had some country in them, you know?

With the help of Ashley Gorley, Rhett Akins, Parker Welling and Jesse Frasure, “What’s Your Country Song” was born. “We decided to dive in and make the whole song old country song lyrics that tie into a story. And it was really interesting how we started to progress the song. I actually threw one of my dad’s song titles in the second verse, ‘That Ain’t My Truck.’ And so we picked a lot of songs that I felt like really shaped me as an artist and put those into the verses.”

Watch Thomas Rhett perform “Country Again” and “What’s Your Country Song” live at the ACM Awards in the video below.