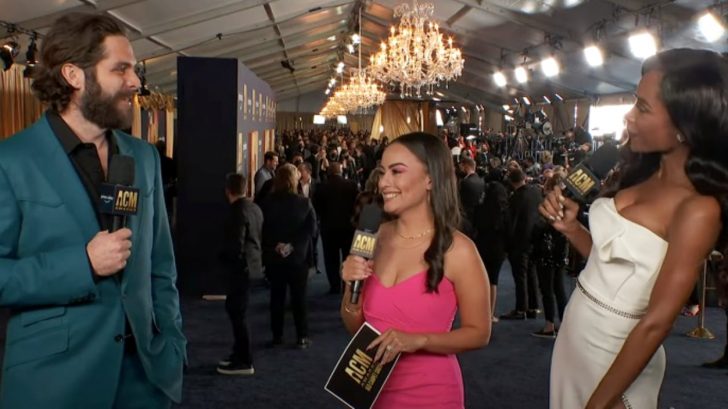 Thomas Rhett was one of the best-dressed stars at the 2022 ACM Awards on Monday night (March 7). The “Slow Down Summer” singer walked the red carpet in a bright blue suit from Dolce & Gabbana.

Rhett complemented the suit with black boots from Tecova and a watch from Bremont.

But as polished as Rhett looked, there was a small issue with his outfit.

During a red carpet interview with Entertainment Tonight, Rhett confessed he experienced a wardrobe malfunction earlier in the night.

“My zipper fell off right before, so I’m taped up,” he explained.

Rhett said he was “trying to stand really still” so he wouldn’t experience another mishap. “…so make sure the camera’s just like right here,” he joked.

Despite the slight snag in the evening, Rhett was looking forward to the ceremony:

“It is a big night,” he said. “I mean, first time we’ve done this with real people in a while, and I got out of the car right before Dolly. I was like, ‘this is amazing,’ but yeah, getting to perform two songs, nominated twice, just very, very blessed to be here.“

As Rhett said, he sang twice during the ceremony. He performed “Praise the Lord” with Breland and also delivered a solo performance of “Slow Down Summer.” Watch the latter performance below.

Rhett did not wear his blue suit for those performances…so there was no need for him to worry about another wardrobe malfunction!