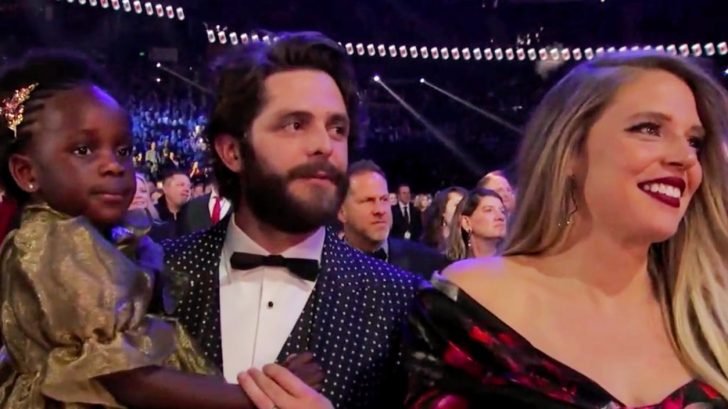 Country fans are used to seeing Thomas Rhett and his wife, Lauren Akins, walk red carpets for awards shows and events. In fact, the couple just appeared at the BMI Awards on Tuesday night (November 12).

Lauren, who is currently expecting her and Thomas’ third daughter, wore a gold dress that hugged her baby bump.

Hellooooo sweet baby girl ? she was POPPIN’ OUT last night at the @bmi awards✨ (are we SURE I’ve still got 11 weeks to go with her @thomasrhettakins?? ????)

Just one day later (November 13), the couple turned out to celebrate the CMA Awards. This time, they walked the red carpet with all three of their girls in tow!

Leading up to the ceremony, Thomas shared that he would bring multiple dates to the CMA Awards. In addition to Lauren, Thomas said their daughters, Willa Gray (age four) and Ada James (age two), would also walk the red carpet.

While speaking to Taste of Country Nights, Thomas revealed that his entire family would wear matching outfits. And per his daughters’ request, he said they would be sparkly.

“We’re all going to be pretty sparkly. That’s what my girls wanted: They were like, ‘We want to wear sparkly things.’ I guess I’m involved in that,” he said.

Sure enough, Thomas, Lauren, Willa, and Ada all looked dazzling when they walked the red carpet prior to the CMA Awards!

#ThomasRhett and #LaurenAkins attended the #CMAawards with their precious daughters, plus baby no. 3 arriving soon! ❤️

Never would have known it was their first @cma awards✨?

#CMAawards last night. This time with all 4 girls. What a life ?? Thanks @dolcegabbana for the family look

In his interview with Taste of Country Nights, Thomas said he hoped they would be able to get some good pictures at the CMA Awards. “I hope none of them are crying when we take our first photos, or it may be an even better memory,” he said.

It looks like everyone held it together, and they got some precious family photos as a result!

Thomas and Lauren have been capturing many of their family memories on film, and recently shared some of them in a new video accompanying Thomas’ single, “Remember You Young.” You can catch that video below.

Aren’t Willa and Ada the cutest?