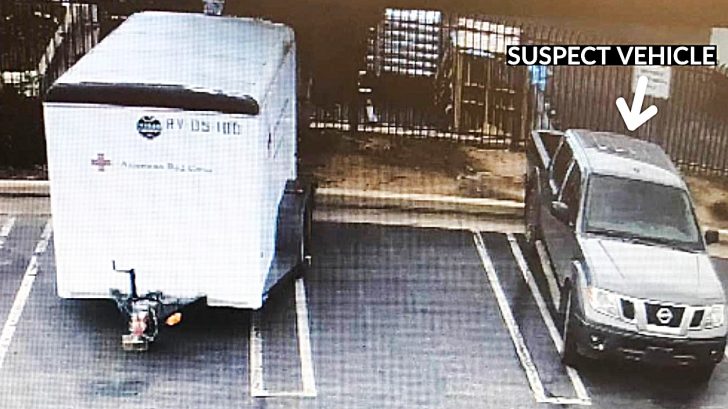 Riverside Police Department dropped a post on Facebook asking for help in finding two suspects who stole a Red Cross trailer filled with cots, blankets, and some masks during the COVID-19 lockdown in California.

On Sunday, March 22nd, 2020, it happened in the middle of the day around 12pm and was caught on security cameras overlooking the parking lot where the trailer was parked. The men pulled up in a gray or silver 2010 to 2018 Nissan Frontier pickup truck with an extended or 4-door cab. Their truck had no front license plate.

Police figured the two men believed the trailer had supplies in it to help them get through the coronavirus pandemic and that’s the reason why they stole it. The trailer is worth around $3,500 by itself and the supplies in trailer cost around $4,000. The department said it’s a 1997 Well Cargo utility trailer with a Red Cross emblem on the sides of it. The trailer had a California exempt license plate on the back with the numbers 15912.

The thieves pulled into the lot and pried the locked hitch from a utility trailer. Then they backed their truck up to the trailer, hooked it, and drove off. If anyone recognizes the men or the vehicle they were driving, authorities are asking that you please contact Detective Ron Knoffloch at (951) 826-8718, or you can email him at [email protected]

Those who want to remain anonymous can email [email protected] or use the Riverside Police Department’s mobile app “Submit a Tip” and enter the reference report number 200008551.