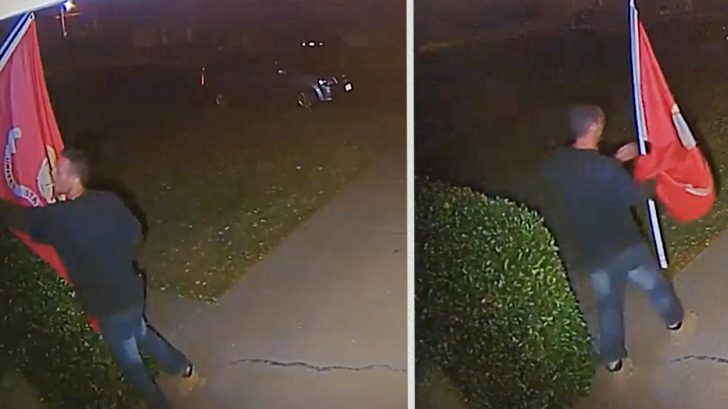 Veteran Joe Maldonado from Lubbock, Texas said he noticed his U.S. Marine Corps flag was missing so he decided to check his security camera footage to see what happened to it.

To his surprise, the footage showed a stranger walk straight up his driveway and snatch the flag right off the side of his house. He’s got several cameras surveilling his home and signs in the yard saying that cameras are watching at all times, and the thief still had the nerve to steal it. Joe says he’s in complete disbelief.

It happened around 2:30am on Wednesday, May 6th, 2020, and Joe said “thank God” his wife made him take the alerts off his phone because he was not very happy to see the thief in the video and may have done something crazy if he had caught him in the moment. Joe’s neighbor, Patrick Kittens, said he noticed the thief in the area parked on the street the day before.

Joe is a former Marine who served in the 1990s and said the flag was more than just a piece of property to him, it was sentimental. He’s bewildered someone would steal from him because he’d give the shirt off his back to a stranger.

“The flag has sentimental (value) for me but it’s not important. I can always get another flag, and if someone really wanted something like that I wouldn’t have a problem giving it to them, but when you come and steal it, you know, it’s just not right,” Joe told KXAN.

Watch The Full Interview In The Video Report Below