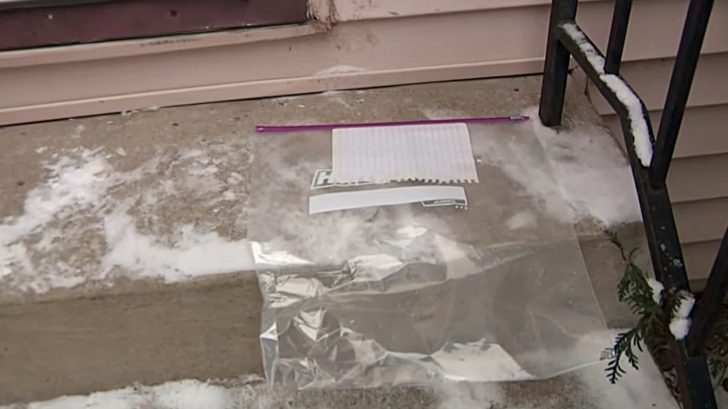 Hilary Smith from St. Paul, Minnesota got her Amazon Christmas package stolen from a real-life Grinch who not only took her mail but left an arrogant “thank you” note on the porch for her to read.

She ordered the gift for her boss at work and knew it was waiting for her at the house but said when she got home was surprised to see “a piece of notebook paper folded neatly” on her doorstep where her package was supposed to be.

Hilary told CBS local news in Minnesota when she bent down to pick up the note this is what it read:“So just a quick little thank you for leaving me the opportunity of stealing your package. Very nice of you. Thank you. The new owner of your package,”

No thank you. Porch pirates are the scourge of the holiday season, creeping around neighborhoods at all hours of the…

She Posts The Note To Facebook & Grabs The Attention Of Police

Angry and confused, she posted the note to her Facebook account which caught the eye of the local police and news stations who reached out to her. Sgt. Mike Ernster of St. Paul Police Department spoke out and said they’ve never experienced anything like this in the community but urge anyone else who experiences it to report it.

“We want people to report crimes as they occur so we can keep track of them and hopefully solve them,” Mike told CBS local news.

In the meantime, Hilary has put together a decoy package that she’s leaving on her porch for the thief in case he wants to come back again. The decoy she says has a little “gift from her dog” that she hopes prevents thieves from violating her again.

Overall, the silver lining of this is that the incident has raised awareness for people not only in her local community but all people around the world who are receiving packages to their doorstep. If you are a victim of someone stealing your package then please call this non-emergency number, 651-291-1111, and report it.

News Report On The Stolen Package Below