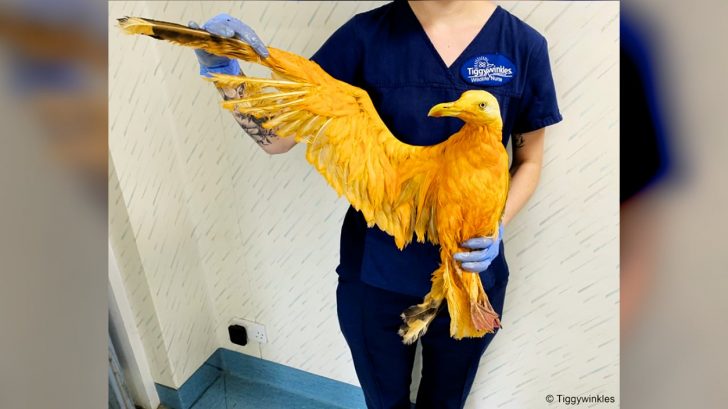 In early July, good samaritans in the UK were surprised to discover an orange-colored bird that was stranded on the side of the road and was unable to fly.

The stunned citizens got in touch with the Tiggywinkles Wildlife Hospital, and staff members came out to rescue the bird. They too, were just as amazed by the bird’s bright orange color.

As you would expect, the bird was unlike anything the rescuers had ever seen before. They were puzzled as to why the bird was unable to fly, writing on Facebook that he appeared healthy, though he had a “pungent smell.”

Because of the bird’s unusual color, it’s easy to understand why the rescuers’ initial thoughts were that he must be some rare, exotic creature.

This is one of the strangest casualty circumstances we have seen in a while! This bright-orange herring gull was rescued…

But the truth about the bird and his vibrant orange color was soon discovered.

After a while, the staff at Tigglywinkles realized that the bird they were dealing with wasn’t an exotic, unknown creature. Instead, he was just a common herring gull that somehow managed to cover his entire body in curry after falling into a vat of chicken tikka masala, a popular dish in India and the UK.

Once they finally discovered the truth behind the bird’s orange coloring, the Tiggwinkles staff gave him a bath and the color washed right off. They appropriately decided to name the seagull “Vinny” after a particular type of curry.

How did I miss this news story? https://t.co/qOHiRbqDIb

Writing on Facebook, the hospital staff said that Vinny is now doing well, and is no longer bright orange.

“He is now looking much better and should be able to go for release very soon!” the Facebook post reads.

We’re happy to hear that Vinny is in good health and is able to go back to the wild. Hopefully he keeps away from such bright-colored dishes from now on!