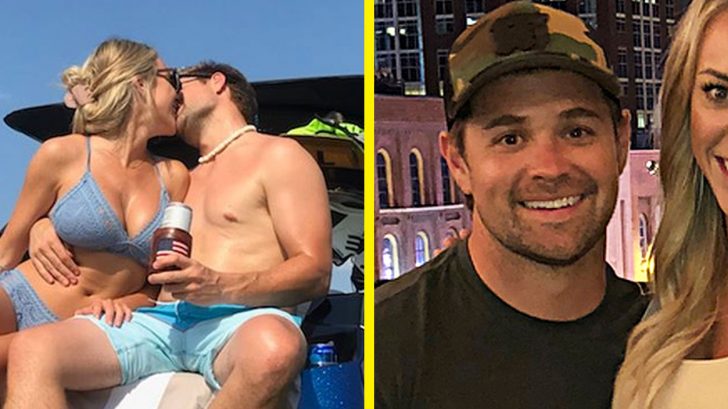 After ending his 5-year-long relationship with fellow NASCAR driver, Danica Patrick, this rising champ has landed a new beauty in his life- and she is drop-dead gorgeous!

.Stenhouse Jr has a new woman in his life pic.twitter.com/oKFZEZ2iYV

Rick Stenhouse Jr. has been on a roll – headed straight for the top in NASCAR and it looks like his personal life is following the same trajectory. Back in November, it was confirmed that he and Danica had parted ways after a long time together. She came out about her new relationship with quarterback Aaron Rodgers not too many months after, but Stenhouse had stayed quiet on his own romance.

Great night of racing yesterday, favorite raceday of the year being able to watch races then cap it off with the 600. We had a good start to the race got off for 100 laps then the last 100 the car was on point. Solid 10th. Wore my heart rate monitor last night ? she spiked a few times

Just months ago, Stenhouse Jr. posted one of the first photos of himself and new gal (possible girlfriend) Brittany Long standing next to his No. 17 Fastenal car. She’s got beautiful locks of blonde hair and clearly has a love for fitness and sports – just like Stenhouse!

Fans went wild exclaiming how beautiful she was and how great the two look as a couple. After a bit of social media research, it appears the two have been dating for a while and have many cute photos together!

It was about six months since his public split with Danica Patrick before he started dating Brittany – but it’s clear that these two are making the most of their time together – and from the looks of it they’re enjoying every single minute!

Taking to Instagram for a post about his Father’s Day celebration with his family, Ricky Stenhouse Jr. shared several photos of the fun times he had along with Brittany Long – and thanked Kyle Larson for loaning out his boat!

Check out the carousel of photos below (swipe left for more)!

Great Father’s Day weekend with our dads family and friends. The music and lake didn’t disappoint. Thank you @kylelarson42 for letting us borrow ur boat.