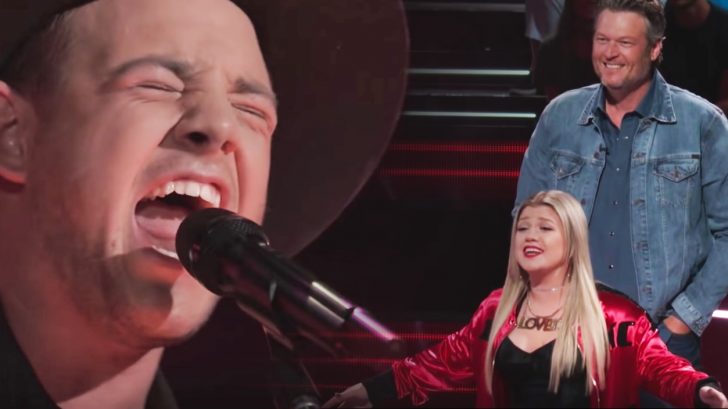 Season 15’s premiere of The Voice consisted of several Blind Auditions – but one country singer’s audition had Kelly Clarkson and Blake Shelton throwing down over the artist.

As North Carolina native Kameron Marlowe walked onto the stage, you could tell he was ready to give a powerful performance. Decked out with his guitar, leather jacket and hat – he looked the part and quickly showed he could act it too! The second he opened his mouth to sing Luke Combs‘ “One Number Away,” the judges’ interest was peaked.

At 21 years old, Marlowe wowed the two country-connected judges right off the bat with his deep vocals and unique tone. Even Adam Levine, who traditionally looks for pop artists expressed that he regretted not turning his chair but when he asked if he would have had a chance, Marlowe confirmed, “No.” Levine took it like a champ and proceeded to talk up his long-time buddy, Blake Shelton.

I hope your album is better than that jacket… @adamlevine

Obviously upset, Clarkson went out of her way to snag the artist for her team. She even got out of her chair to try and block Shelton from getting the country boy! Somehow she must have forgotten that he is 6’4″…

After the crowd gave their applause and cheers for their favorite judge – Marlowe had to finally make his decision.

Watch the video below to find out which judge snagged this rising star and let us know if you think he made the right choice in the comments!