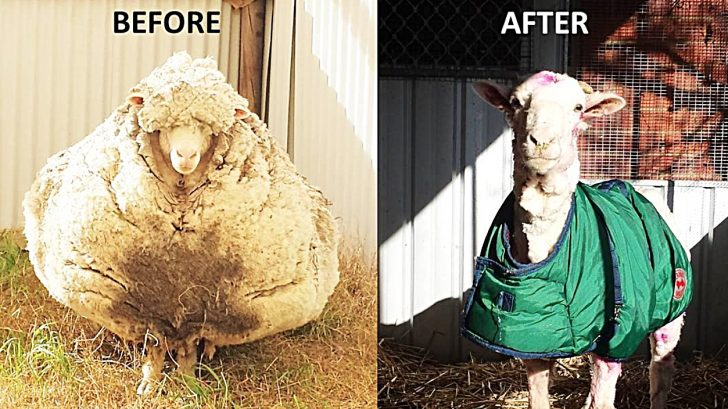 In September of 2015, a lost sheep was found in the wilderness of Canberra, Australia and later went down in history for having the heaviest fleece ever recorded. How much did it weigh? It weighed a whopping 90 pounds!

The world record "Chris the Sheep" fleece is now on display for a limited time only @rspca_act! #christhesheep #canberra #cbr #ACT #australianhistory

The sheep was rescued by an animal charity called RSPCA (Royal Society for the Prevention of Cruelty to Animals) after receiving a call from hikers. The hikers said that it could barely stand due to his wool which weighed almost half his body weight.

The animal was immediately rescued by RSPCA and named Chris. They took him to an animal refuge in Canberra where he waited to be sheared and undergo medical exams. It was speculated that Chris had been roaming in the wilderness for about 6 years on his own.

The animal was sedated due to being extremely scared of humans and was sheared by national shearing champion Ian Elkins in Weston Creek, Australian Capital Territory, on September 3rd, 2015. It took 45 minutes to carefully shear the entire coat off of Chris in one big chunk. Once it was done, the sheep went from weighing 187 pounds to 97 pounds.

“He’s looking really good, he looks like a new man,” Tammy Ven Dange, chief executive of the Canberra RSPCA said at the time, according to New York Post. “For one thing, he’s only half the weight he used to be.”

Here's a picture of the" Chris the sheep" fleece along with three staff members that helped to rescue him. You can now view the fleece at RSPCA ACT located at 12 Kirkpatrick Street, Weston. #rescue #sheep #christhesheep #ACT #australianhistory #cbr #canberra #rspcaact

The process of shearing Chris broke a few world records. For one, it usually takes 2 minutes to professionally sheer a sheep but because of how massively neglected Chris was it took Elkins 45 minutes. That was the lengthiest professional sheep shearing session ever recorded.

But that’s not what made the big headlines. The major record that was set that day was the amount of wool cut from Chris. Elkins sheared 41.10 kg of wool off Chris which equals out to 90.6 pounds, and that officially landed him in the Guinness World Records for the most wool ever sheared from a sheep in a single sheering.

Chris not only made it into the Guinness World Records book but his story was featured in international news headlines everywhere. A children’s book was even written about Chris. After getting so many people asking Tammy Ven Dange to write a book about him, she did. It was called The Misadventures of Chris the Sheep.

Sadly though, Chris passed away in October of 2019, but he is still one of the most famous sheep to ever be known. In fact, one of the most viewed videos of Chris is on YouTube and it got over 3 million views. You can watch that video below, right now.