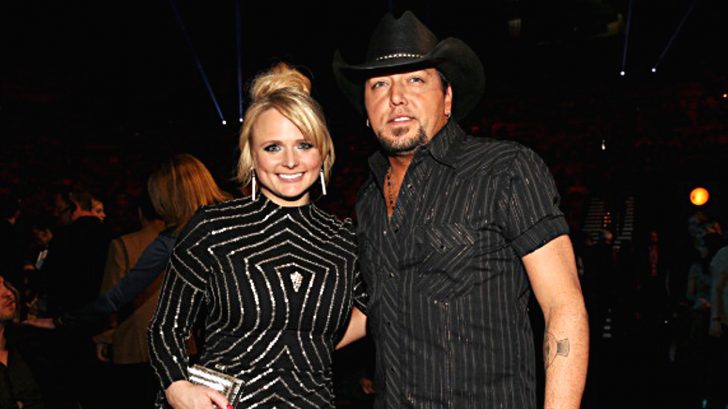 Way back in 2007, Jason Aldean and Miranda Lambert paired up for a duet on a song called “Grown Woman.” It’s a song you’ve likely never heard of before, since it was never released as a single.

The years passed and all but Aldean and Lambert’s most devoted fans soon forgot that “Grown Woman” ever was. But even those who didn’t know about the duet could tell that Aldean and Lambert were close friends. They took their friendship to the road, and often toured together in the early years of their careers.

As time passed, Aldean and Lambert’s friendship remained strong. So when it came time for Aldean to start picking tracks for his new album, Rearview Town, he knew he wanted Lambert to join him on one.

Speaking to NPR, Aldean said that he sent Lambert a song to see if she’d be interested in singing it with him. But she wasn’t impressed, so Aldean offered to send another song along.

That song was “Drowns the Whiskey,” a traditionally-tinged track that follows the common country music themes of sorrows and alcohol.

“When I sent her that one, she kind of flipped out,” Aldean told Taste of Country about Lambert’s reaction to the song. “She was on board then. And then she came in to sing it and nailed it.”

“Drowns the Whiskey” isn’t a straightforward duet between the two singers…Lambert is merely a featured vocalist. Still, fans couldn’t contain their excitement once Aldean revealed the track prior to the release of Rearview Town.

The Duet That Almost Wasn’t…

But as it turns out, the highly-hyped collaboration came *this close* to never happening.

Aldean exposed the reason why “Drowns the Whiskey” was almost left on the shelf during a recent interview with CMT. As he explained, someone else already had a hold on the song by the time he discovered it.

That someone was Tyler Farr, another one of Aldean’s country singer friends.

The details are a bit fuzzy for Aldean to remember, but he does recall that even though Farr had a hold on the song, he wasn’t really into it.

“And I kept talking him into recording it, and he just wasn’t feeling it or whatever,” Aldean said,

Finally, Aldean had enough, and told Farr that if he didn’t want to cut the song, he’d be happy to. He sent the song to Lambert not long afterward, and the rest is history.

We’re glad that Farr gave up his hold on “Drowns the Whiskey,” because Aldean and Lambert’s recording is as intoxicating as can be. There’s no official audio for the duet yet, but one fan named Simon Willemin shared an awesome acoustic cover of it. Check it out!