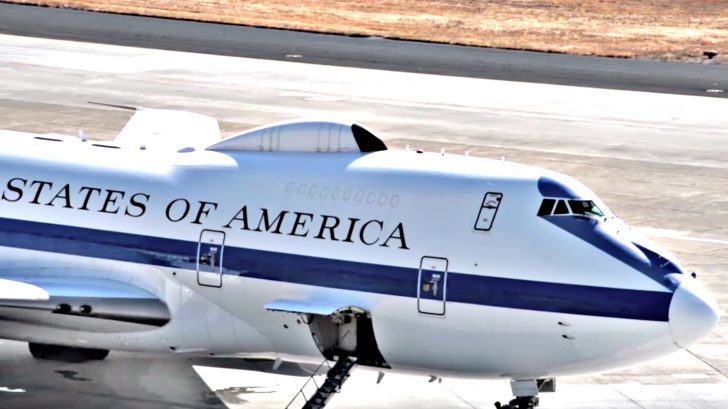 Based on Boeing’s 747 design, this super-custom plane is on alert 24 hours a day, 7 days a week ready to leap into action in case of nuclear attacks on our country. And there’s a reason it cost more than $220 million…

The U.S. Air Force E-4B “Nightwatch” is a super militarized version of the 747-200B that is meant to serve as a strategic flying command center for the military and is called the “National Airborne Operations Center” or NAOC when in action.

Specifically designed to survive a nuclear blast’s electromagnetic pulse, the aircraft still relies on analog instruments to fly – as they are less susceptible to the effects. Additionally, the equipment and wiring on-board has been fitted with shielding to protect it from an EMP.

The E-4B is able to carry up to 112 people on board including flight personnel making it the largest crew in Air Force history.

While the first delivery of the E-4B first went into service in the mid-1970s, the Air Force awarded Boeing a $2 billion contract in 2005 to continue upgrading the fleet. Beyond the massive price tag of the plane – each costs $160K per-hour to operate.

If the Nightwatch “Doomsday Plane” is put into service, it will become the center of operations for the President, Secretary of Defense, and the Joint Chiefs of Staff – ensuring that communications between the heads of government and the military remain uninterrupted.

Check out the full tour of this massive, hardened plane below.