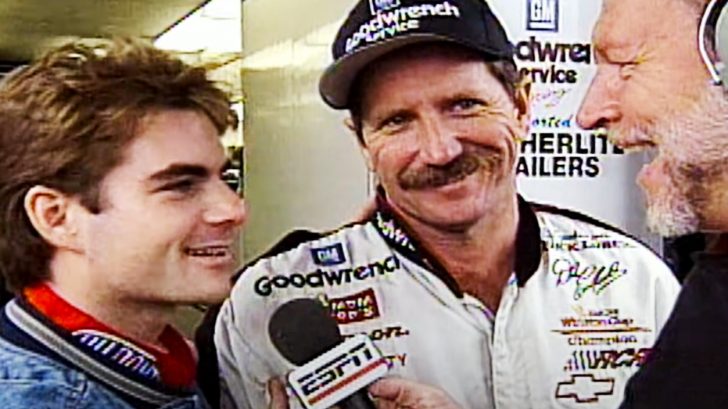 During the peak of NASCAR’s iconic success, two of the biggest names on the track, Dale Earnhardt Sr. and Jeff Gordon were some of the fiercest competitors in the field…but they still had tremendous respect for one another.

Despite a 20-year age difference and a vastly different fan base, the two recognized greatness in one another.

Of Dale Sr., Gordon once said, “As much as me and him butted heads and had wrecks and had this rivalry, I still looked up to him so much and respected him. I enjoyed racing with him and learning from him on and off the track.”

Dale Earnhardt began his career as a racer before Gordon was even in kindergarten, and Earnhardt appreciated sticking to old-school, tried-and-true racing methods — he was cool as a cucumber on the track, even when the race got intense.

But, along with those old-school habits came some others that gave Gordon pause. Reflecting on his time in the Cup Series with Earnhardt, Gordon says that he questioned Earnhardt’s refusal to partake in updated safety measures (like switching to a closed-face helmet).

Jeff Gordon and Dale Earnhardt pose together at the 1993 Winston Cup banquet. (Rookie of the Year and Champion) pic.twitter.com/kdujr7qxVq

Earnhardt would drive one-handed with his non-steering arm resting as if on the back of a passenger seat as if he was returning home from an afternoon of fishing.

Once, Earnhardt even flashed Gordon the peace sign with his free hand while they were racing. Gordon was stunned but said it was typical cool, confident Earnhardt.

Hear Jeff Gordon talk about Dale Earnhardt in the video below…