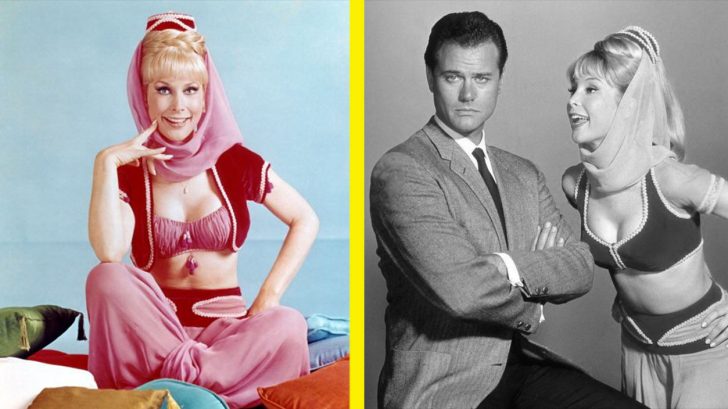 The TV series I Dream of Jeannie ran from 1965 to 1970 starring Barbara Eden as a 2,000-year-old genie called Jeannie, and Larry Hagman as an astronaut named Tony Nelson who becomes her master.

Happy Anniversary to "I Dream of Jeannie!" September 18th 1965 Captain Nelson discovered her and five years of silly…

The show had high ratings and went on for 5 Seasons before it was abruptly cancelled after fans lost interest due to one particular scene.

Throughout the show, Eden and Hagman had a chemistry that was undeniable. They effortlessly played off of this chemistry while on set, and fans could sense the physical attraction that existed between the two of them.

In order to try and increase viewership for I Dream of Jeannie, the publicity department for NBC staged a fake wedding for Eden and Hagman just one week before the wedding episode of the show was set to air. TV writers and journalists from around the country were invited to the fake wedding to make it look like Eden and Hagman had many guests. Eden knew that the wedding episode would be a disaster and was totally against the idea of their characters getting married. Firstly, Jeannie wasn’t even human. Secondly, the show was all about the build-up of sexual tension between Jeannie and Tony. Once the pair got married, all of that tension would go away. Lastly, according to the show’s mythology, genies can’t be photographed, yet they still had a professional photographer at the wedding.

Fans absolutely hated this publicity stunt. They could tell that the wedding was insincere and they ended up turning on the characters and the actors. The show was canceled shortly after the infamous wedding episode.

For a full list of things that happened behind the scenes of the show, watch the video below.