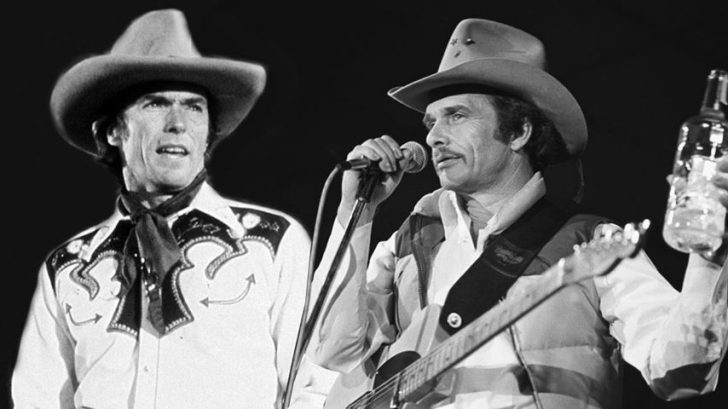 Remember when Clint Eastwood topped the country charts at number one? Don’t feel bad if you don’t, not many people do!

The duet with country megastar Merle Haggard was Eastwood’s one and only country hit ever. The fact that the versatile director and actor was even involved in recording a country tune was a total fluke!

In an interview with Rolling Stone Magazine, he even suggested the top performing hit belonged to Merle Haggard and the Hag “sort of dragged [him] along.”

Evidently, Haggard agreed with Eastwood’s assessment of the situation.

According to Classic Country Music Stories, “Eastwood wasn’t a very good singer,” country legend Haggard told Newsweek Magazine. “But, Clint was making the movie (Bronco Billy), financing and directing it. Why not let him go ahead and do a duet with me if he wanted to?”

Ironically, George Jones had been selected for the duet originally. But, based on schedules and legal commitments, Jones was unable to commit.

One Of Two Singles

Though the first-rate singer was second choice, Haggard ended up recording two singles for the movie’s soundtrack, “Bar Room Buddies” and “Misery and Gin.”

It was the “Bar Room Buddies” song that made it all the way to number one on the country charts. The likable song provided a perfect background for drinking. In fact, it broke into the list of “best drinking songs” at one point.

In looking at the alcohol-related lyrics from this Bronco Billy soundtrack tune, it’s easy to see why this could easily be a favorite of drinking buddies everywhere.

We’re bar room buddies and that’s the best kind
Nobody fools with a buddy of mine
I’ll laugh when you’re happy and I’ll cry when you’re blue
We’re bar room buddies and we’re doing fine
>So pour me another, we got nothing but time
Old chug-a-lug-a-lugging bar room buddy of mine
The bartender trying to turn out the lights
Well, maybe it is time we called it a night
Hell, we’ll wake up the roosters if we drink them real slow
Well, let’s have a double and a six pack to go.

Number One At Last

Remaining at number one for a week, the song fared better than the movie which died at the box office.

Now, close your eyes, kick back and enjoy this rare combination of Clint and The Hag singing “Bar Room Buddies.”